This incredible illustration captures the entire known universe in a single image. 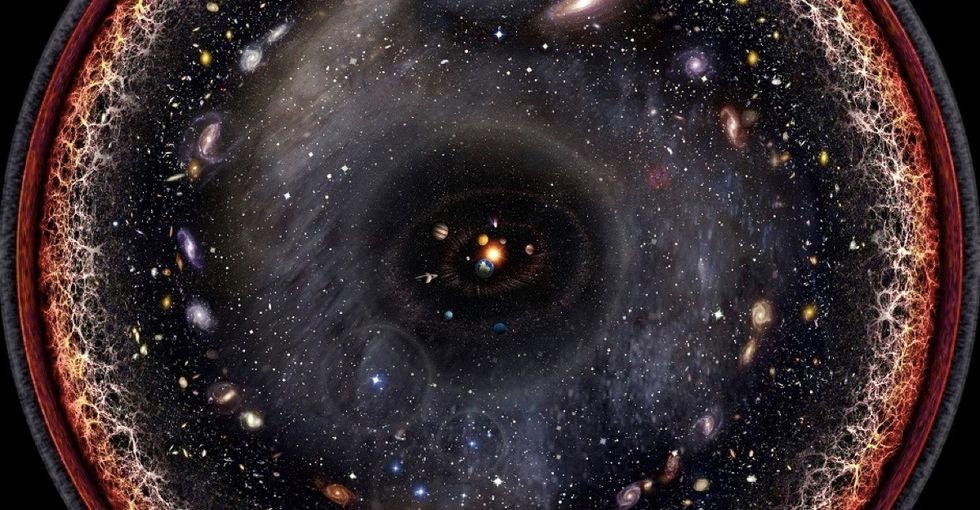 While poking fun at astronomer Carl Sagan in a now infamous sketch, comedy duo Tim and Eric once stated you wouldn’t want to put the universe into a tube.

Why? Because "you’d end up with a very long tube probably extending twice the size of the universe."

GIF via Tim and Eric.

So maybe the universe won’t fit in a tube. But what about cramming it into a single image?

It’s a pretty mind-blowing idea to be sure. Most of us have enough trouble mapping out our work weeks, let alone the entirety of known existence.

But that’s precisely what artist Pablo Carlos Budassi was able to do in the brilliant illustration below, which is an artist's depiction of the breadth of the observable universe.

How did Budassi accomplish such an incredible, visually striking feat?

Well, first he consulted a series of logarithmic maps of the universe published by Princeton University researchers in 2005.

A logarithmic map is one that increases by an order of magnitude (a power of 10) instead of by equal increments. This type of map takes massive amounts of information and compresses it into a singular image that can be deciphered as easily as a third-grader’s "Favorite Pizza Topping" pie chart.

The visual representations of these maps, however, can be a bit hard to read for the average person.

Worst. Rorschach test. Ever. "Map of the Universe" by Gott & Juric, Princeton University, used with permission.

Not what you’d normally call easy on the eyes, amiright? It was exactly this ... let’s call it "lack of visual flair" that inspired Budassi to create the hypnotic image above.

The idea came to him while planning his son’s birthday party, according to Tech Insider.

He was creating hexaflexagons for the kids — a fancy way to describe those paper, choose-your-own-adventure origami thingies that were all the rage back in elementary school.

"When I was drawing hexaflexagons for my son's birthday souvenirs, I started drawing central views of the cosmos and the solar system," said Budassi, likely impressing anyone within earshot. "That day the idea of a logarithmic view came, and in the next days I was able to [assemble] it with Photoshop using images from NASA and some textures created [on] my own."

The image is just as impressive close up, where you can see details of different parts of the universe.

I swear I can see my house from here. Image by Pablo Carlos Budassi/Wikimedia Commons.

Set at the center of Budassi’s illustration of the observable universe is our solar system — Mars, Jupiter, Saturn, and all the other neighbors.

Just beyond the orbit of Neptune lies the Kuiper belt — a massive, asteroid-type belt and home to dwarf planets Pluto, Haumea, and Makemake — then the Milky Way and Andromeda galaxies.

Pulling back a bit, we see the cosmic web, a gargantuan, web-like structure consisting of several irregular galaxies which was first captured in an image just two years ago. At the very edges of Budassi’s map lie the cosmic microwave radiation and invisible plasma produced by the Big Bang.

Never before has the insignificance of our entire existence been so beautifully rendered.

I kid, but Budassi’s illustration kind of puts into perspective how small we are in the grand scheme of things, does it not? Makes that 15-minute traffic delay on the way to the office seem, I dunno, not worth losing one’s cool over, maybe?

After all, when you think about it, even the big things are pretty tiny from a certain vantage point.