This incredible speech shows why Harvey Weinstein was the biggest loser at the Oscars.

Judd, Hayek, and Sciorra delivered a must-watch speech for the Time's Up era. 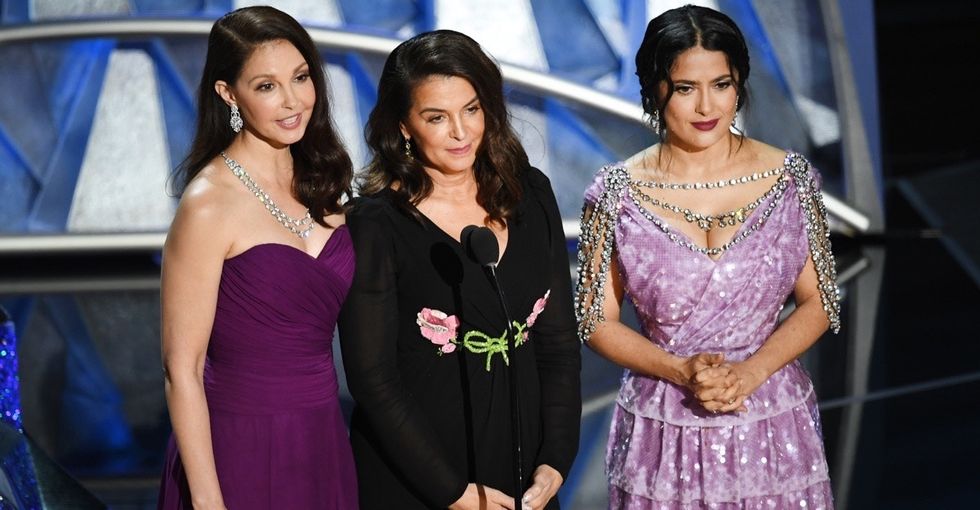 During the first Oscars of the #MeToo/Time's Up era, three of Harvey Weinstein's accusers took the stage to deliver a speech we all needed to hear.

About a day before the ceremony, it was announced that actresses Ashley Judd, Salma Hayek, and Annabella Sciorra would appear as presenters. The women had one thing in common: They'd all spoken out about being harassed or assaulted by Hollywood producer Harvey Weinstein.

As allegations against Weinstein rolled in, the three actresses each shared their stories of assault at the producer's hands. In December, The New York Times published Hayek's firsthand account of her experience with Weinstein. In October, Sciorra, best known for her Emmy-nominated role on "The Sopranos," opened up to The New Yorker about being raped and harassed by Weinstein. That same month, Judd spoke with ABC's Diane Sawyer, retelling her experience as a young actress sexually harassed by a man with the ability to destroy her career before it started.

Judd, Sciorra, and Hayek appear at the Oscars. Photo by Kevin Winter/Getty Images.

The speech they delivered didn't focus much on the actions of Weinstein specifically, but on the progress of a movement getting stronger every day.

"It’s nice to see you all again. It’s been a while," said Sciorra. "It’s an honor to be here tonight. This year, many spoke their truth and the journey ahead is long, but slowly a new path has emerged."

"The changes we are witnessing are being driven by the powerful sound of new voices, of different voices, of our voices — joining together in a mighty chorus that is finally saying time’s up," said Judd.

GIFs via The Hollywood Reporter/Twitter.

"We work together to make sure that the next 90 years empower these limitless possibilities of equality, diversity, inclusion, and intersectionality," Judd added before throwing to a montage of this year's cinematic trailblazers.

The Time's Up movement has been a huge success, raising $21 million in its first 60 days.

According to a new report from Deadline, more than 1,700 people from over 60 industries contacted the group in hopes of being able to utilize its legal defense fund for workplace harassment cases. The movement began at the beginning of 2018 as a way for Hollywood to use its influence to help victims of harassment find justice across industries.

Ashley Judd and Mira Sorvino, who was also targeted by Weinstein, at the 90th Annual Academy Awards. Photo by Valerie Macon/AFP/Getty Images.