His mom took care of him when he was a sick child. Now he's paying her back big time.

'I’m going after everything I can, the most I can.' 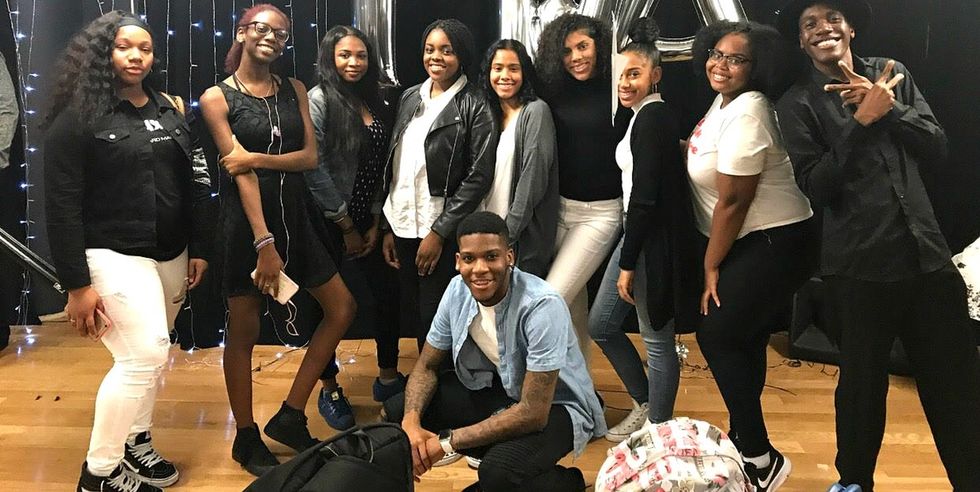 Dashawn Hightower was only 3 years old when doctors discovered he had a tumor wrapped around his kidney.

He went through two years of intensive treatments that included having a needle stuck under his chest to make sure his kidney was still working.

Eventually, he made it out the other side cancer free but sans one kidney.

"Every day, I just think I’m lucky to be here," Dashawn says.

However, the experience wasn't only hard on him — his mother and two younger sisters were seriously affected as well.

Dashawn's mother became extremely overprotective of him, even after he was declared healthy again.

"She didn’t want me to do anything," Dashawn recalls. "No sports. No after school activities."

His mother raised him and his sisters on her own, and it was always difficult to make ends meet. So when Dashawn got into his teens, he decided to find a way to lift some of the burden off of her, even if it meant worrying her a little bit in the beginning.

It began with him attending a 6 a.m. meeting at his school about a student-focused career-building program.

When he reached high school, he joined This Way Ahead — an internship program designed to help teens get a leg up on their future.

An intern working at Old Navy.

The internship program is one of the efforts under Old Navy's cause platform ONward!. The brand is actually expanding the program through a trigger donation this Black Friday. You can buy their cozy socks for $1, and each purchase will result in a $1 donation to Boys & Girls Clubs, up to $1 million. The money will go to creating an employment program for Boys & Girls Club youth, offering them career coaching and a first job at Old Navy stores.

It's all about giving kids the skills they need to succeed in the workplace.

Every day, the program focused on a different job-based subject — what questions to ask at an interview, how to write a great resume, customer conflicts, etc. Slowly but surely, Dashawn felt his confidence building. He knew he could be a great business leader.

"It taught me responsibility," Dashawn says. "I own all my actions."

As a result, Dashawn started taking care of his sisters more. He'd help them with their homework and get ready for school. And soon, he landed his first job.

Dashawn with his mom at his Old Navy job.

"[The program] helped me to have the upper hand when I interviewed for a position at Old Navy," Dashawn recalls.

Not surprisingly, he aced the interview and was brought onboard as a paid intern in 2014. Last year in November, he was hired as a full-time staff employee, and today, he's a business and training operations specialist at Old Navy's Herald Square location in New York City.

He's finally getting to lift some of the financial strain off his mom, and she could not be happier with how far he's come.

She even remembers the first time he bought her a pair of shoes. She had the receipt framed.

Today, Dashawn takes every opportunity that comes his way to make life better because he knows he might not have had a life at all.

Dashawn with interns in the TWA program.

He tries to instill the same go-getter attitude in his associates and the interns he now manages. Many of them come directly from Old Navy's first jobs program, so they're already at the top of their game. But they still come to him sometimes with questions or concerns about their next steps. Since he's been in their shoes, he shares the same advice he's given himself in the past.

The story of Patricia and Leslie "LD" McWaters dying together might have both of those elements, but it is also tragic because they died of a preventable disease in a pandemic that hasn't been handled well. The Michigan couple, who had been married for 47 years, both died of COVID-19 complications on November 24th. Since they died less than a minute apart, their deaths were recorded with the exact same time—4:23pm.

Patricia, who was 78 at her passing, had made her career as a nurse. LD, who would have turned 76 next month, had been a truck driver. Patricia was "no nonsense" while LD was "fun-loving," and the couple did almost everything together, according to their joint obituary.

Brantley and his snowman

"Would you like to build a snowman?" If you asked five-year-old Brantley from Texas this question, the answer would be a resounding "Yes!" While it may sound like a simple dream, since Texas doesn't usually see much snow, it seemed like a lofty one for him, even more so because Brantley has a congenital heart disease.

On Dec. 11, 2019, however, the real Macy's Santa and his two elves teamed up with Make-A-Wish to surprise Brantley and his family on his way to Colorado where there was plenty of snow for him to build his very own snowman, fulfilling his wish as part of the Macy's Believe campaign. After a joy-filled plane ride where every passenger got gift bags from Macy's, the family arrived in Breckenridge, Colorado where Santa and his elves helped Brantley build a snowman.

Brantley, Brantley's mom, and Santa marveling at their snowmanAll photos courtesy of Macy's

Brantley, who according to his mom had never actually seen snow, was blown away by the experience.

"Well, I had to build a snowman because snowmen are my favorite," Brantley said in an interview with Summit Daily. "All of it was my favorite part."

This is just one example of the more than 330,000 wishes the nonprofit Make-A-Wish have fulfilled to bring joy to children fighting critical illnesses since its founding 40 years ago. Even though many of the children that Make-A-Wish grants wishes for manage or overcome their illnesses, they often face months, if not years of doctor's visits, hospital stays and uncomfortable treatments. The nonprofit helps these children and their families replace fear with confidence, sadness with joy and anxiety with hope.

It's hardly an outlandish notion — research shows that a wish come true can help increase these children's resiliency and improve their quality of life. Brantley is a prime example.

"This couldn't have come at a better time because we see all the hardships that we went through last year," Brantley's mom Brandi told Summit Daily.

Now more than ever, kids with critical illnesses need hope. Since they're particularly vulnerable to disease, they and their families have had to isolate even more during the pandemic and avoid the people they love most and many of the activities that recharge them. That's why Make-A-Wish is doing everything it can to fulfill wishes in spite of the unprecedented obstacles.

That's where you come in. Macy's has raised over $132 million for Make-A-Wish, and helped grant more than 15,500 wishes since their partnership began in 2003, but they couldn't have done that without the support of everyday people. The crux of that support comes from Macy's Believe Campaign — the longstanding holiday fundraising effort where for every letter to Santa that's written online at Macys.com or dropped off safely at the red Believe mailbox at their stores, Macy's will donate $1 to Make-A-Wish, up to $1 million. New this year, National Believe Day will be expanded to National Believe Week and will provide customers the opportunity to double their donations ($2 per letter, up to an additional $1 million) for a full week from Sunday, Nov. 29 through Saturday, Dec. 5.

There are more ways to support Make-A-Wish besides letter-writing too. If you purchase a $4 Believe bracelet, $2 of each bracelet will be donated to Make-A-Wish through Dec. 31. And for families who are all about the holiday PJs, on Giving Tuesday (Dec. 1), 20 percent of the purchase price of select family pajamas will benefit Make-A-Wish.

Elizabeth living out her wish of being a fashion designer

Additionally, this year's campaign features 6-year-old Elizabeth, a Make-A-Wish child diagnosed with leukemia, whose wish to design a dress recently came true. Thanks to the style experts at Macy's Fashion Office and I.N.C. International Concepts, only at Macy's, Elizabeth had the opportunity to design a colorful floral maxi dress. Elizabeth's exclusive design is now available online at Macys.com and in select Macy's stores. In the spirit of giving back this holiday season, 20 percent of the purchase price of Elizabeth's dress (through Dec. 31) will benefit Make-A-Wish.You can also donate directly to Make-A-Wish via Macy's website.

This holiday season may be a tough one this year, but you can bring joy to children fighting critical illnesses by delivering hope for their wishes to come true.