This model wants to redefine what 'normal' looks like on fitness magazines.

Nadia Aboulhosn is helping redefine what 'healthy' looks like. 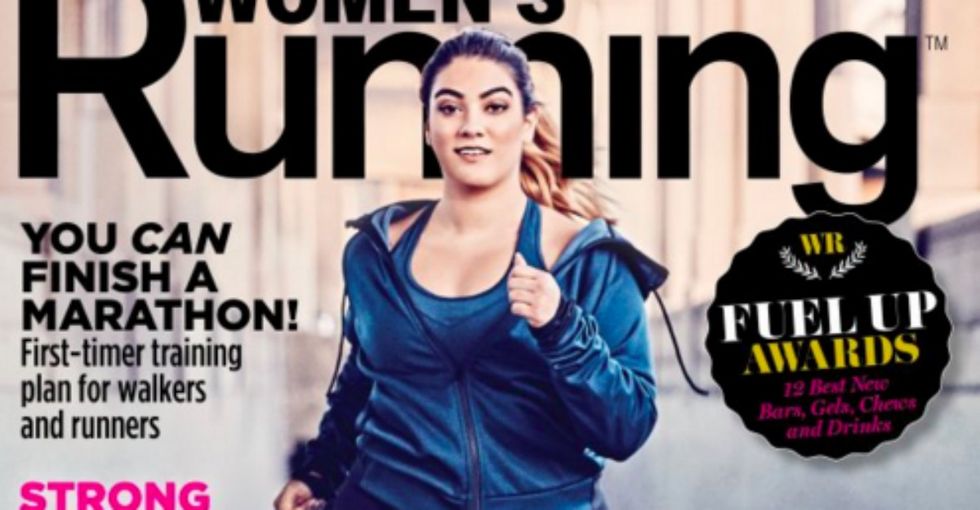 And if I were you, I'd remember that name.

The model, blogger, and "rule-breaker" is the latest cover girl on Women's Running magazine.

And, as the outlet noted, the Los Angeles-based social media star is truly "a force of nature."

You don't see Aboulhosn's body size or shape too often on or in fitness magazines, which is unfortunate, to say the least.

Even though she may have more curves than the stereotypical fitness models' chiseled abs of steel, Aboulhosn is in pretty great shape, and she has been for awhile.

Take, for instance, the fact that she was the only girl on her high school's football team and that she could "bench press a crazy amount."

“The coach liked to joke with the guys when I would beat them in practice," Aboulhosn, who now stays in shape by running and circuit training, told the magazine.

If Aboulhosn is in great shape (so much so that she's circuit training and out-lifting the guys), why aren't more women with bodies like hers also gracing the covers of fitness magazines?

Because, as many experts will tell you, you shouldn't judge a book by its cover when it comes to clothing size and physical health. Fat people can be in great shape and incredibly healthy, just like skinny people can be in poor shape or unhealthy. To assume that one body type is more or less healthy than others just by looking at them is absurd. Not to mention, health means different things to different people: What's healthy for one person may not be healthy for another.

Health and fitness mags should take note of this — as they're often the ones perpetuating these body stereotypes.

Author and health researcher Linda Bacon, Ph.D., spoke with Welcometoterranova in January about the widespread fallacy that connects body size and health.

"To paraphrase a now famous comment from my friend and rock star Marilyn Wann, 'the only thing you can diagnose about a fat person is your own level of prejudice,'" Bacon told Welcometoterranova. "Even the heavily entrenched idea that heavier people eat more than thinner people isn’t supported by data."

That's why the April cover of Women's Running magazine matters.

Aboulhosn hopes her cover can be part of a larger conversation on body positivity and what it means to be "normal."

“I’m just trying to normalize what should have already been seen as normal," Aboulhosn told BuzzFeed, noting she doesn't use the term "plus-size" to describe herself because it contributes to the idea that one particular body size is the standard and anything other than that isn't ideal.

“Even if it’s making people feel uncomfortable right now," she said of her cover, "I hope [readers] take away that [body type diversity] is what normal is going to be eventually.”

Former CBS News anchor Dan Rather has become a beloved voice of reason, knowledge, and experience for many Americans on social media the past few years. At 88, Rather has seen more than most of us, and as a journalist, he's had a front row seat as modern history has played out. He combines that lifetime of experience and perspective with an eloquence that hearkens to a time when eloquence mattered, he called us to our common American ideals with his book "What Unites Us," and he comforts many of is with his repeated message to stay "steady" through the turmoil the U.S. has been experiencing.

All of that is to say, when Dan Rather sounds the alarm, you know we've reached a critical historical moment.

Yesterday, President Trump again refused to commit to a peaceful transfer of power after the election when directly asked if he would—yet another democratic norm being toppled. Afterward, Rather posted the following words of wisdom—and warning—to his nearly three million Facebook fans: