This mom's open letter about her son's nail polish is the perfect response to hate.

'Help us change the world into one that deserves him.' 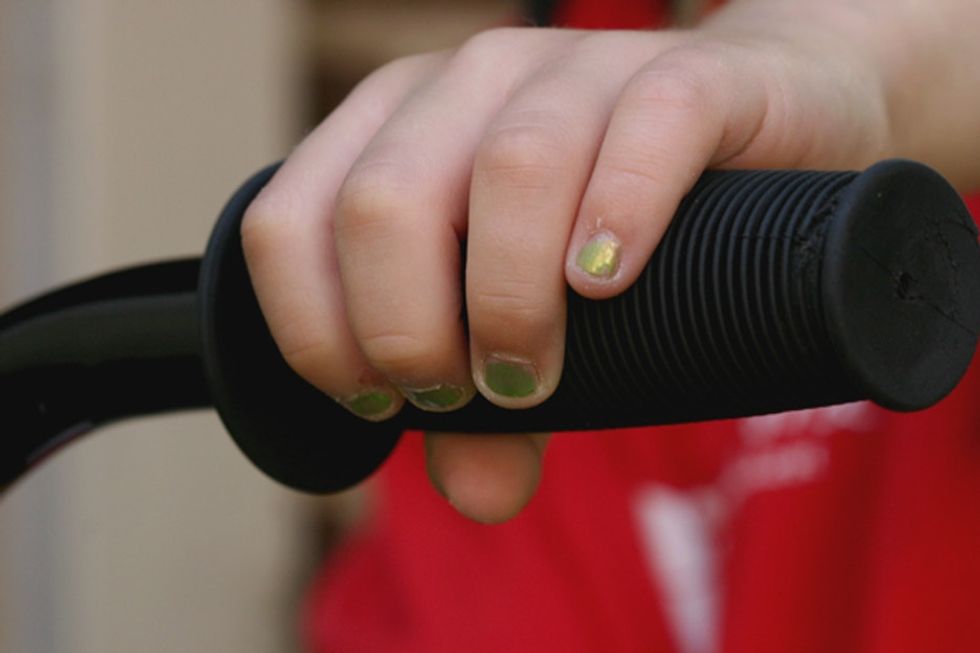 Pennsylvania mom Devon Berryann has a son who likes to wear nail polish and she doesn't care who knows it.

He's also quite fond of the boys in his class, and often tells his mom he hopes to marry one and have lots of babies someday. She, in turn, is incredibly supportive of all his life choices.

Lately, however, he's been receiving some unfriendly attention from local kids and classmates about his bold nail polish and outfits (he likes to wear tutus).

Suddenly Devon was worried — was she encouraging behavior that might one day endanger her son?

It's understandable that, in the wake of the mass shooting in Orlando, parents of LGBTQ children would be concerned for their safety, now and in the future.

Concerned though she was, Devon concluded that it's far better for her son to embrace who he is and be happy, rather than hide his inclinations and live in fear.

Devon realized, as a parent, it's imperative to build up your kids in whatever direction they choose to go because doing the opposite means letting hate and bigotry win. Considering the devastating treatment of the LBGTQ community, in the middle of Pride month no less, that message needs to resonate louder than it ever has before.

So, Devon bought her son a bunch more nail polish and joined him in wearing tutus.

Most importantly, she penned a public letter on Facebook (that she shared with an adorable photo of her son) that speaks to her recent parental conundrum and her hopes for her son's (and for every child's) future.

"My six year old son likes to wear nail polish. He likes to wear girls’ clothes and tutus. He tells me about the boys he likes at school. He says he will marry them and adopt babies. Maybe he will outgrow it. Maybe not. I love and accept him for who he is. I always thought that doing that would protect him from the pain of hurtful words and bullies, and I didn’t worry.

A couple days ago he came home and told me again about kids teasing him at school for his nail polish, and for the first time ever I considered talking him into taking it off. Into hiding that part of himself. Because for the first time ever I was scared that he would be gunned down one night when he was out having a good time with his friends. In that moment I was so terrified that I wondered if it would be better to stop appeasing him. Then I remembered all the reasons I let him be who he wants. Because it makes him happy. Because nothing hurts more than seeing your child truly sad. Because pretending to be someone you’re not to please other people only leads to self-loathing. To depression and to suicide. And that too made me afraid. Why do I have to fear for him because of what he likes and who he cares about? Aren’t we past all this yet?

I want this world to change. To be better for him. To DESERVE him. Because he is a wonderful, amazing person. He wants to be president. He thinks he is a ninja. He listens when you explain things and remembers it forever. He notices when you’re sad and tries to cheer you up. He has a light about him that just can’t be put out, no matter how hard some people have tried.
As scared as I am, I know that this world is not going to change with more fear. It has plenty of that. What it needs is more love and acceptance.

So yesterday, we went out and bought more nail polish, and today we wore tutus. So here he is world. See my boy for the amazing person he is. Show him love. Show him acceptance. Help us change the world into one that deserves him."

Since she first posted it to Facebook, Devon's letter has been shared over 24,000 times.

Parents and nonparents alike are commending her for coming out and declaring her love, concern, and above all, pride for her son. While she was a little overwhelmed by the worldwide response she received, Devon is thrilled that her message touched so many.

"After the shooting, I didn't want people to be scared to let their kids express themselves anymore. I've had a lot of people message me saying what a difference it would've made in their lives if their parents would've been just as accepting as us," she told ABC news.

Hopefully Devon's post will inspire more parents to embrace their kids for who they are, both publicly and privately, and let them know that they deserve love and respect and support, no matter how they dress or who they love.