This teacher is using video games in his lesson plan. And kids (obviously) love it. 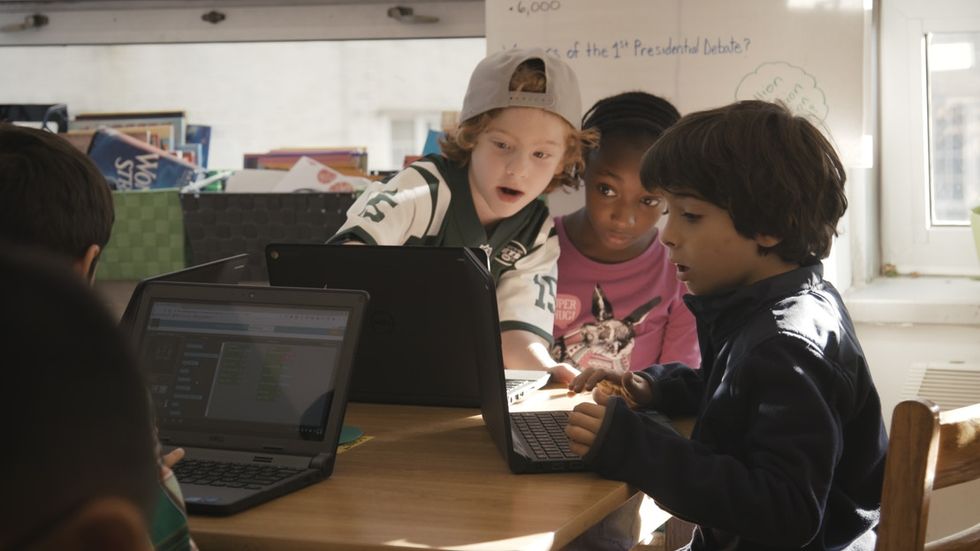 It all started with a lesson on "Romeo and Juliet" and a student who wanted to show what he learned ... using Minecraft.

Chris Aviles, then a high school English teacher, didn’t even know what his student meant by that idea. But he let him run with it, so Aviles' student re-created scenes and settings using the popular video game — and his classmates loved it.

"Once the other kids saw that he was allowed to do that, you know, it kinda blew up in the classroom," says Aviles.

That moment sparked a change in how Aviles approached education and technology with his students.

Aviles with his eager students. Photo by Katie Smith, used with permission.

Aviles is now the ed-tech coach for Fair Haven School District in New Jersey, where he runs the Innovation Lab, a new kind of learning program with a curriculum that's very in tune with the times.

"It's kind of like a 21st century think tank, maker space, where we really just try to get our hands dirty and give our kids the experience that they need to be successful in the future."

Gamification in this case means using game mechanics to engage students, like splitting into teams and scoring points in class activities. Game-based learning is using actual video games like Minecraft to teach and assess kids.

Photo via Microsoft, used with permission.

"There’s a lot of lessons that you can learn in a video game and that lesson is being delivered in pretty much every kid's favorite format," adds Aviles. "And we’re kind of crossing that line where learning is fun and fun is learning."

And at the Innovation Lab, it's all about customization and collaboration.

That’s why Aviles loves Minecraft so much as a teaching tool. It’s a blank canvas where students can create anything their heart desires. On top of that, kids are able to learn at their own pace. Says Aviles, "I can have 25 kids all in Minecraft doing 25 different lessons at varying difficulties while I work around the room and I teach through the trouble."

Photo via Microsoft, used with permission.

The lab is also about empowerment. "Instead of the being the person in front of the room who thinks they know everything, I work alongside my kids, and I push them towards their goal, and we’re now learning together in the same classroom," Aviles says.

He likens this learning process to when he teaches kids how to code. "It teaches them how to attack a problem. It teaches them that it’s OK to fail the first time because you might not get the answer right the first time. And then you go back and you troubleshoot and you squash bugs over and over until you get the desired result. And so that process of thinking like a coder, I think, is really valuable."

Currently, only 40% of K-12 schools across the country actually have a computer programming or coding class, but Aviles says he hopes that will change in the near future.

Getting kids involved in computer science early is especially important given the lack of diversity and unique voices that exist within the industry.

"Whoever is writing the code is going to be controlling the future," says Aviles. "Right now, the field is dominated by white men, and making sure that a diversity of voices is represented in computer science is only going to ensure that the population that this technology serves is equally represented."

The computer science industry is projected to yield 1 million more jobs than students by 2020. So getting kids interested and encouraging them to make their voices heard can only bring forth a more unified and prosperous future.

Adds Aviles, "Every kid has their own background and has their own story and experiences that they can bring to the next product that is going to serve millions of people."

Interested in getting your child to explore the wonderful world of code? Check out Microsoft’s new Minecraft coding tutorial, as well as all the fun (and free) resources available on the YouthSpark Hub.

Sir David Attenborough has one of the most recognized and beloved voices in the world. The British broadcaster and nature historian has spent most of his 93 years on Earth educating humanity about the wonders of the natural world, inspiring multiple generations to care about the planet we all call home.