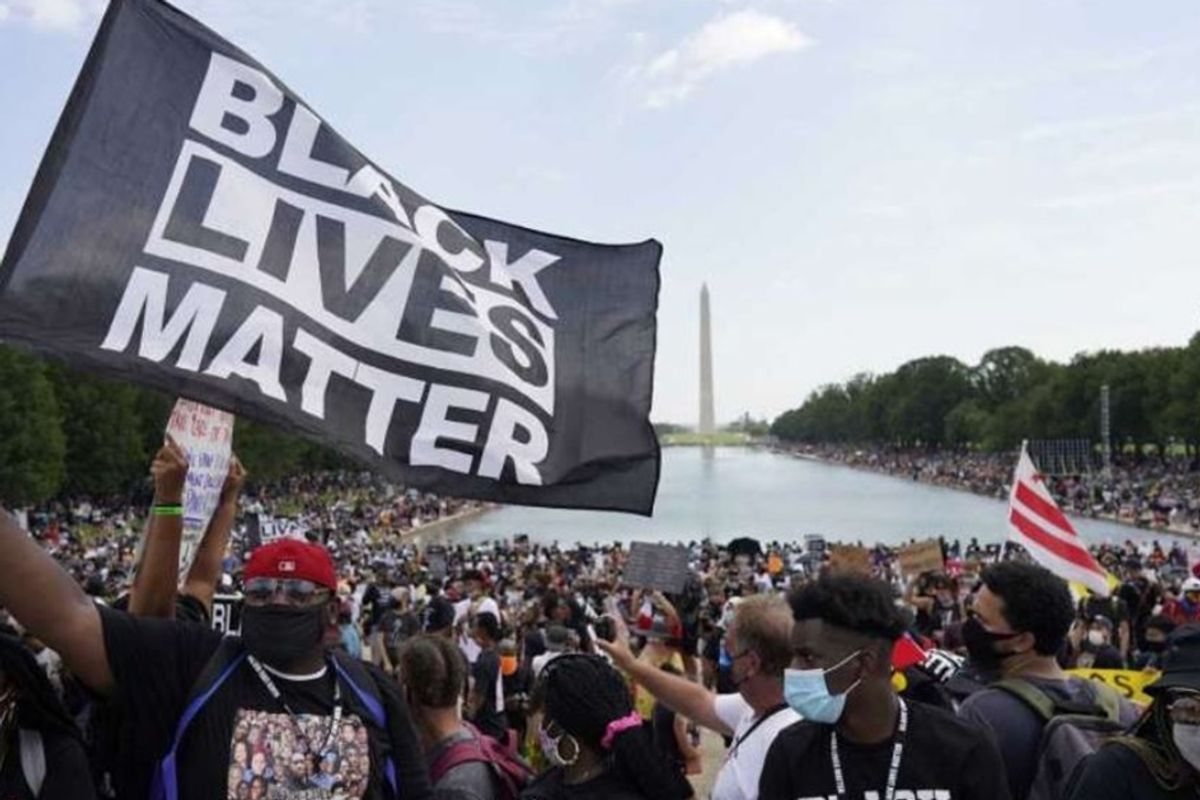 Fifty-seven years after Martin Luther King Jr.'s "I Have a Dream" speech at the Lincoln Memorial for the 1963 March on Washington for Jobs and Freedom, thousands of people returned to the same location for the Commitment March: Get Your Knee Off Our Necks.

The day's events took on added importance after an officer from the Kenosha, Wisconsin Police Department shot Jacob Blake on Sunday, sparking protests throughout the country.

The event was organized by the National Action Network as a call for police reform and racial justice. Lines for the event extended for several blocks as organizers took temperature checks for all attendees to mitigate the spread of the COVID-19 virus.

"We've come to bear witness, to remain awake, to remember from where we've come and to carefully consider where we're going," King said according to the Associated Press. "Whether you're here in person or watching on (television networks), thank you for joining us for this March on Washington."

"We're taking a step forward on America's rocky but righteous journey toward justice," he added.

"We didn't just come out here to have a show," Sharpton said. "Demonstration without legislation will not lead to change."

The late Democratic representative John Lewis, who passed away earlier this month was referenced several times during the event. Sharpton paid homage to Lewis' call for people to get into "good trouble" to fight injustice, saying, ""we didn't come to start trouble, we came to stop trouble."

"Black lives matter," Sharpton said. "And we won't stop until it matters to everybody."

She said that if Civil Rights leaders from the '60s march were in attendance today they would, "share in our anger and frustration as we continue to see Black men and women slain in our streets and left behind by an economy and justice system that have too often denied Black folks our dignity and rights."

"They would share our anger and pain, but no doubt they would turn it into fuel," Harris continued. "They would be lacing up their shoes, locking arms and continuing right alongside us to continue in this ongoing fight for justice."

One of the emotional high-points of the event was a speech by George Floyd's brother, Philonise Floyd, who said he wished "George were here to see this right now." His sister, Bridgett Floyd, said, "we have to be the change."

Trayvon Martin's mother, Sybrina Fulton, shared words of encouragement with the audience. "Even though we're going through a crisis, even though it looks dark, I want to tell you to be encouraged," Fulton said. "Don't stop saying Black lives matter, don't stop protesting."

Later in the evening, the Movement for Black Lives, a group of over 150 organizations that make up the Black Lives Matter movement, will hold a virtual Black National Convention.

The convention will unveil a platform to enact laws inspired by the central themes of this summer's protests, investments to education, healthcare, housing, and social services as well as police reform.

They started dating as heterosexuals in 2004. Now, they've blossomed into a loving lesbian marriage.

Some couples are just meant to be together. Sarah, 38, and Jenni Barret, 37, have gone through some major changes as a couple and after 15 years of marriage, have managed to find themselves happier than ever.

Jenni and Sarah both met through a friend at Arizona State University in 2004. But back then Sarah was called Sean. Jenni identified as a straight woman and Sean, a straight man.

"I knew he was The One as soon as he gave me a killer head massage that same night," Jenni told The Daily Mail. The couple tied the knot in December of 2005.