Three more African-American dolls I'd like to see from American Girl.

The new doll is a great start, but there's much more to African-American history. 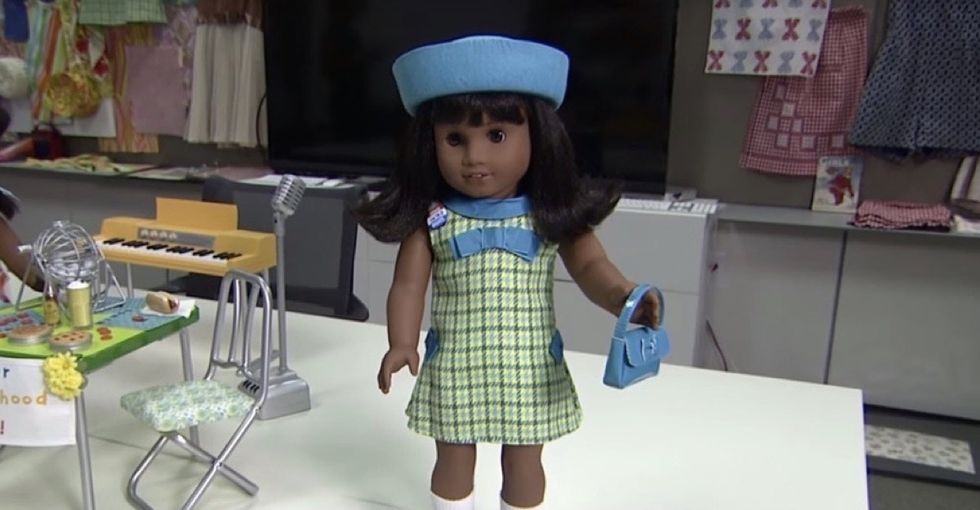 For just the third time in the company's 30-year history, American Girl announced a new African-American character to their roster of historical dolls.

Meet Melody Ellison, a 9-year-old girl living in Detroit in the 1960s, a time of optimism and upheaval. Melody wants to be a singer and uses her voice to speak up about the inequality and injustice she sees in her community.

Created under the guidance of a six-person advisory committee consisting of educators, community advocates, historians, and even the late civil rights activist Julian Bond, Melody's story, outfits, and accessories are grounded in history and authentic to the time.

The collection includes other well-known characters like Josefina, a young girl living on a ranch in New Mexico in 1824, and Kaya, an American-Indian girl leading a life of adventure in 1764.

Kaya doll and accessories. Image via CBS This Morning/YouTube.

Melody comes less than two years after the company took some heat for discontinuing two characters of color.

Cecile (left) and Ivy were both retired in 2014. Image via CBS This Morning/YouTube.

But Melody, who will be released this summer, is hitting shelves all by herself, so hopefully she'll be around for much longer.

But even so, with just two African-American characters in their BeForever line, American Girl is ignoring a wealth of history.

Since dolls and characters like these offer an access point for children to learn and experience American history, it's vital that they don't fall into the trap of "the single story." There's more to black history than slavery (told through American Girl's Addy doll) and the civil rights movement, and it's important for young people of all backgrounds to understand the historical, political, and cultural movements that brought us to where we are today.

Here are some characters and dolls from different periods in African-American history I'd love to see and purchase for the young people in my life.

Pearl has always lived in Harlem, but her neighborhood has come alive with the sights and sounds of fresh voices and new faces. Because her mother runs a boarding house, Pearl, a young aspiring writer, gets to meet them all. What can these artists, poets, dancers, and musicians teach her about telling her own story?

What would young Pearl ask Josephine Baker? Find out in this book that doesn't exist yet. Photo by Hulton Archive/Getty Images.

Bessie's father is a tenant farmer, working off the land and going deep into debt. Her mother teaches reading and writing to children and adults in their small town. But Bessie dreams of being an inventor and tinkers with tin cans and scrap wood all day. Her father insists she hold tight to her dreams, but when he loses his land and the Wilborns are forced to move, will Bessie have to abandon her goals to help provide for her family?

Amaya's world turns upside down when her older brother's best friend is killed by police. Suddenly, Amaya's once quiet neighborhood is full of demonstrations, marches, and sirens. Her family is heartbroken, and no one understands, especially her best friend Darcy, who doesn't get what any of this has to do with race. Her parents urge her to stand up for what she believes in, but what does she believe in?

Amaya could be a lot like Zaniyah Siddell, 8, seen here, who protested at the Million Mom March in Washington, D.C., last year. Photo by Gabriella Demczuk/Getty Images.

This is just a small selection of characters and stories rooted in African-American history.

There's so much more to explore, and hopefully, companies (American Girl or otherwise) will take notice and continue to empower and encourage young people through creative play.

Go behind the scenes with "CBS This Morning" to see how Melody came to life.