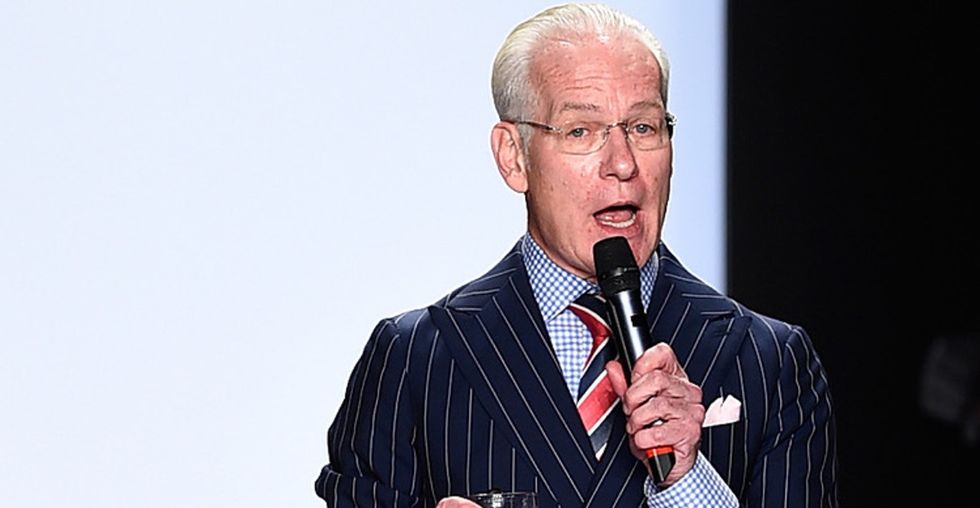 "Project Runway" mentor Tim Gunn took his fashion industry colleagues to task for failing American women in a lacerating op-ed for the Washington Post on Friday.

"I love the American fashion industry," Gunn wrote in the column. "But it has a lot of problems" — not the least of which is the dismissive attitude toward women deemed "plus-size," nearly 2/3 of all women in America.

"It’s a puzzling conundrum. The average American woman now wears between a size 16 and a size 18, according to new research from Washington State University. There are 100 million plus-size women in America, and, for the past three years, they have increased their spending on clothes faster than their straight-size counterparts. There is money to be made here ($20.4 billion, up 17 percent from 2013). But many designers — dripping with disdain, lacking imagination or simply too cowardly to take a risk — still refuse to make clothes for them."

The timing of Gunn's column — published to coincide with the first day of New York City's Fashion Week — appears calibrated to capture the attention of his fellow industry professionals, who the TV personality charges with disinterest in — or hostility toward — women with larger bodies.

"I’ve spoken to many designers and merchandisers about this. The overwhelming response is, 'I’m not interested in her.' Why? 'I don’t want her wearing my clothes.' Why? 'She won’t look the way that I want her to look.' They say the plus-size woman is complicated, different and difficult, that no two size 16s are alike. Some haven’t bothered to hide their contempt. 'No one wants to see curvy women' on the runway, Karl Lagerfeld, head designer of Chanel, said in 2009. Plenty of mass retailers are no more enlightened: Under the tenure of chief executive Mike Jeffries, Abercrombie & Fitch sold nothing larger than a size 10, with Jeffries explaining that 'we go after the attractive, all-American kid.'"

Gunn even called out his own TV show, admitting that "Project Runway" has "not been a leader on this issue."

Indeed, contestants on the series routinely complain about having to design for women who aren't professional models, and they have, on occasion, belittled their clients for not conforming to their preferred body type.

The problem with sizing goes well beyond a few persnickety fashion designers.

Women's sizes can be vague and misleading — often by design. Early attempts to create a standard sizing chart faltered as researchers discovered that real-life women's bodies had a strange habit of defying standardization.

That, coupled with unforced errors like excluding non-white women from surveys, unrepresentative sampling, and the proliferation of "vanity sizing" — the practice, common among retailers, of marking a garment a size or several lower than its actual dimensions — can make shopping for the right piece of clothing a daunting experience. Not to mention that many outlets make their extended or plus-size clothing only available online, where trying things on involves waiting four-six business days and a whole lot of luck.

But there's good news! It's actually not impossible to design clothes for women of all body types, and some designers are starting to get it.

Designer Christian Siriano, who got his start on "Project Runway," recently created a line for Lane Bryant and has made it a point to work with celebrities of a variety of sizes, most recently "Ghostbusters" star Leslie Jones who, initially, couldn't find a designer to dress her.

It shouldn't be exceptional to work with brilliant people just because they're not sample size. Congrats aren't in order, a change is.
— Christian Siriano (@Christian Siriano)1467208991.0

This season's "Runway" winner — Ashley Nell Tipton — secured her victory with a show featuring all plus-size models. While Gunn had some harsh words for her designs in the op-ed, dismissing her win as "tokenism" — her new J.C. Penney line has been embraced by women who have long sought plus-size clothes made by an actual plus-size designer.

In 2014, a group of designers and clothing retailers told Refinery29 that, while plus-sizes are often associated with higher cost of manufacturing, a lack of fashion-forward choices might be partly to blame for low sell-through rates.

Hopefully, Gunn's op-ed can serve as a wake-up call for the rest of the industry.

If anyone can convince more fashion designers to "make it work" for the majority of American women, it just might be this guy.