Trump agrees to meet with the Congressional Black Caucus after a press conference flub.

On Jan. 19, the Congressional Black Caucus sent Trump a letter. On Feb. 16, he answered. 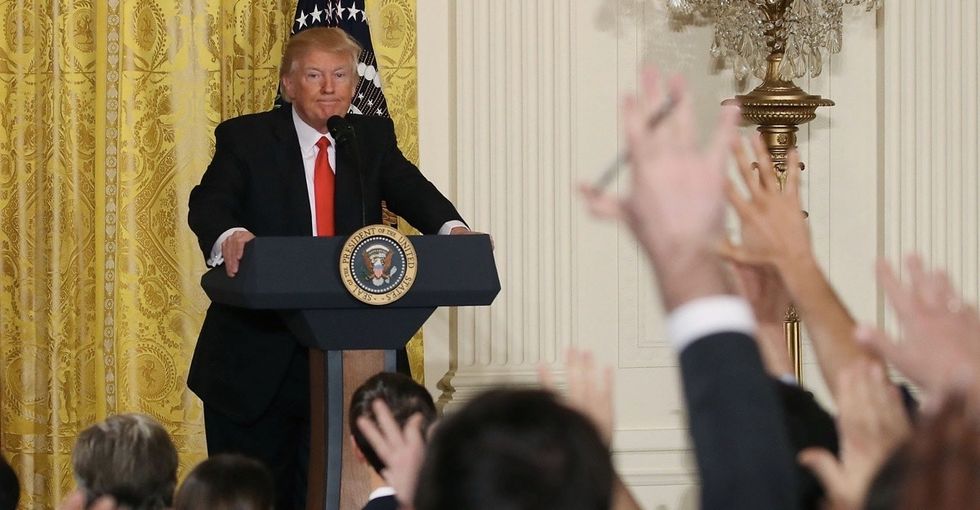 There were plenty of highlights (and lowlights) from Trump's wild first solo press conference as president, but one moment in particular stood out.

Trump called on April Ryan, a reporter for American Urban Radio Networks, who asked if Trump planned to include the Congressional Black Caucus in discussions surrounding Trump's "inner city agenda."

While Ryan acknowledged that she does know some of the members of the CBC, she's a reporter, and setting up meetings between members of Congress and the president is not her job — at all.

What makes the whole situation even more bizarre is the fact that the CBC has been trying to set up a meeting with the president, even sending him a letter last month.

They took to the president's favorite medium, Twitter, to offer a reminder.

The group's five-page letter, offers a point-by-point response to the "New Deal for Black America" that Trump touted during the campaign, calling his plan "the same old 'Trickle Down' economics assumptions that didn’t work for our communities in the 1980’s or in the 2000’s when these failed experiments were tried before."

Still, the CBC indicated an interest in meeting with the president, ending the letter with a "sincere hope that [he] will accept this invitation to engage in an earnest effort to work together on these issues."

As Trump has a tendency to do, he placed blame on someone else. In this case, CBC member and 11-term Congressman Elijah Cummings.

"I actually thought I had a meeting with Congressman Cummings," Trump said. "And he was all excited and then he said, ‘Well, I can’t move, it might be bad for me politically. I can’t have that meeting.’ I was all set to have that meeting. We called him and called him and he was all set. ... But he was probably told: ‘Don’t meet with Trump. It’s bad politics.’ And that’s part of the problem with this country."

According to Cummings, that never happened. "I have no idea why President Trump would make up a story about me like he did today," he told the Washington Post.

The entire encounter was a sight to behold, but at least something good seems to be coming out of it: The CBC is finally getting its meeting with Trump.

And yes, it was April Ryan who reported the story (it all comes full circle).

BREAKING: The White House has reached out to the @OfficialCBC to set up a date for a meeting with @POTUS. Not date or time set yet.
— AprilDRyan (@AprilDRyan)1487285779.0

“For whatever reason, the letter the Congressional Black Caucus sent to then President-elect Trump and incoming White House officials on January 19 was not enough to get their attention,” Chairman Cedric Richmond (D-Louisiana) said in a statement obtained by The Hill. "Since the White House has reached out in an appropriate manner to request a meeting with the caucus, I am now in discussions with them about setting one up."

While this situation seems to have resolved itself, this isn't a good look for Trump, who has a less than stellar record on race-related issues (to say the least).

Earlier this month, he delivered a bizarre Black History Month statement that included some bragging about his electoral victory (Trump received just an estimated 8% of the African-American vote) as well as a shoutout to Frederick Douglass, who Trump said, "is an example of somebody who’s done an amazing job and is getting recognized more and more, I notice." (It's not entirely clear whether Trump realized that Douglass has been dead for more than 120 years.)

Even if you set these aside as rhetorical flubs, there's a pattern of Trump lumping all black Americans together in one homogeneous group and suggesting that they all live in "inner cities." This kind of stereotyping is wrong, it's offensive, and it doesn't help support Trump's own assertion that he's the "least racist person" you've ever seen.

So yeah, meeting with black leaders in Congress is a start. Let's hope he really hears what they have to say.