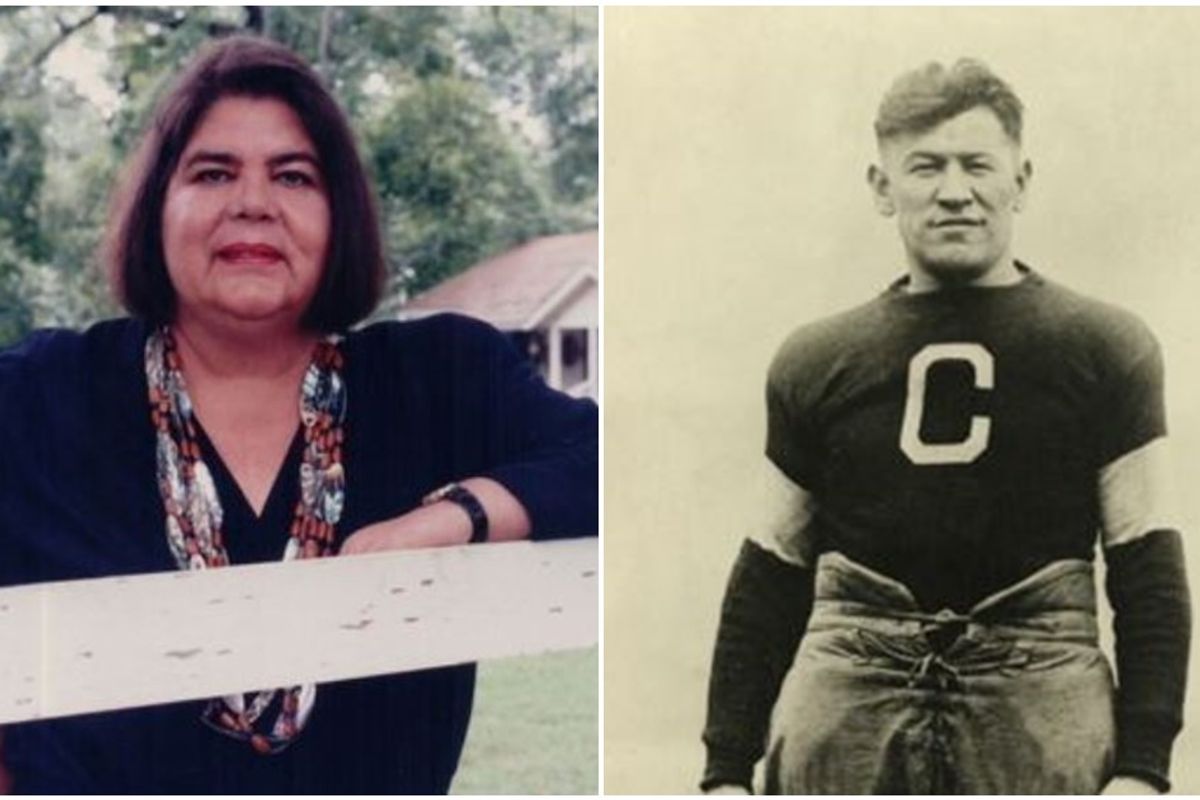 via Vote and wear your mask / Twitter and Wikimedia Commons

President Trump made a fiery, divisive Fourth of July speech at Mount Rushmore where he railed against "new far-left fascism." Trump's choice for the background was questionable, considering he's asked about having his face carved into the monument.

During the speech, he announced an executive order to create a National Garden of American Heroes, a park featuring statues of historical figures who've contributed to the nation's history.

Trump may include a bust of himself in the park because he's received "multiple nominations" for the garden. But at least one Republican governor has sent him a list of very different, truly American, heroes.

Although Trump would love the adoration that comes with having a statue of himself in the garden, historians stand firmly against the idea of a memorial being put up of a living person.

Jim Grossman, executive director of the American Historical Association, said "it would be a mistake" to honor Trump or any living person. For public monuments, "that's a nonpartisan rule that pertains to anybody, regardless of where they are on the political spectrum. And I would defend that up and down all day."

The administration sent out requests to state and local governments for suggestions of who should be included in the garden. Suggestions are supposed to be in by September 1, but most governors, including all Democrats, have refused the request.

"We would encourage the White House to spend their time on the response to the coronavirus," said Pennsylvania Gov. Tom Wolf's spokeswoman Lyndsay Kensinger.

"I haven't given it a moment's thought," Kansas Gov. Laura Kelly told The Associated Press. "I have other things to do."

The list is comprised of only white and black Americans and most political figures are right-wing.

Among the suggestions are:

Wilma Mankiller, an activist, social worker, community developer, and the first woman to be elected to to serve as Principal Chief of the Cherokee Nation.

Will Rogers, a fellow member of the Cherokee Nation, who was one of the most prominent humorists and social commentators of the early 1900s.

Jim Thorpe, a Sac and Fox/Pottawatomie citizen, who was one of the most versatile athletes in American sports history and the first Native American to win a gold medal.

"One of the problems in the United States is the refusal on the part of our young people to remember or to want to… https://t.co/Hk8iGrH1Tk
— RayBoomhower (@RayBoomhower)1577963402.0

He also suggested John Hope Franklin, a Black historian best known for his book "From Slavery to Freedom." Franklin was the grandson of a freed Chickasaw Nation slave. And Ada Louis Sipuel Fisher, who fought to become the first Black student at the University of Oklahoma College of Law.

"The Oklahomans on this list embody the history, spirit, resiliency and strength of our state and people," Stitt said. "They each left a legacy that has far extended past state lines and impacted our world for the better."

"They're Cherokee citizens, but in many ways they belong to the world in terms of the efforts they've put forth in their careers," Hoskin said of Mankiller and Rogers. "The fact that they're Cherokee, of course, is very important to me, and it reflects an effort to add some diversity to those sort of public monuments. I think that's a wonderful thing."

The president wants the statue garden opened before the nation's 250th birthday in 2026. He launched a new task for to create the park, the Interagency Task Force for Building and Rebuilding Monuments to American Heroes.

From Your Site Articles
Related Articles Around the Web
native americans