Watch hundreds of New Yorkers coming together in support of immigrant children. 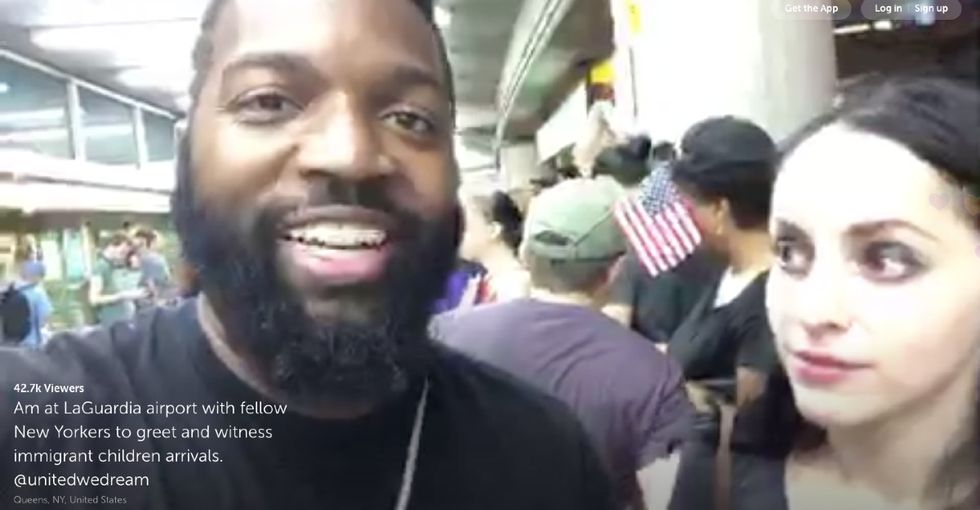 Writer and comedian Baratunde Thurston received a text at 10:55 p.m. Minutes later, he was out the door and on his way to New York's LaGuardia Airport.

"Calling our #HeretoStay Network! Youth & children separated from their families are arriving at LGA airport right now! Still being transported by American Airlines!! Meet us at terminal B arrivals right now!" read the text, sent from immigration advocacy organization United We Dream.

Thurston threw on a pair of pants, grabbed his external phone charger and passport, and caught a ride share to the airport. "Realized I left my Sharpies at home and my driver was like, 'I'm a mom. I always have crayons. Will that help?'" he recounts. "So I brought some crayons."

🚨Calling our #HeretoStay Network! Youth & children separated from their families are arriving at @LGAairport right… https://t.co/J0Rag7L6Uj
— United We Dream (@United We Dream)1529548703.0

Organizations like United We Dream, Make the Road, Jewish Action, T'ruah, and the ACLU were joined by hundreds of supporters to take a stand against family separation.

Earlier in the day, President Donald Trump had responded to backlash over his administration's "zero tolerance" policy about undocumented immigrants caught crossing the border by issuing an executive order ostensibly designed to end the practice of separating families. With these now-unaccompanied children being flown into New York for a placement in facility, advocacy groups sprung into action.

"There are few things New Yorkers hate more than LaGuardia Airport," said Thurston the morning after the protests. "But one of those things is state-sanctioned child kidnapping. So it was beautiful to see hundreds of my fellow New Yorkers show up for immigrants and human rights last night."

On Twitter, he urged his more than 238,000 followers to "keep the direct actions coming."

“This is what solidarity looks like.” Right now at LaGuardia. Our tax dollars have funded the terrorization of fami… https://t.co/WtD6BUtClz
— Baratunde (@Baratunde)1529554836.0

Even if the practice of separating families comes to an end, Trump's executive order might not improve immigration policy.

Some even argue that it'll make things worse. His order ditches the idea of children and parents being held in separate detention facilities in favor of families being housed together in the same place. If child separation was inhumane, family internment isn't a vast improvement.

Our immigration system is broken, and as much as some supporters of Trump's policies might say the answer is simply for people to come to the U.S. through legal means (it should be noted that crossing the border in order to seek asylum is legal), it's harder than ever for people to do.

These problems go further back than just this one president. In May, the ACLU released a report cataloging abuses in immigration detention facilities dating back to 2009. Recent reports by investigative journalism organization Reveal found that a number of people within the immigration detention and shelter industry had backgrounds that included sexual assault and abuse. That group also reported on a lawsuit that alleges that some immigrant children being held were forcibly injected with psychiatric drugs to make them more docile.

These aren't new problems. They didn't start with Trump, and if nothing is done, they won't end with him, either.

We are live from NYC's LaGuardia Airport where Trump admin has sent immigrant children separated from their parents. We are here to witness where they are taking them. (Rafael Shimunov) sign up for call bit.ly/actionready

It seems now more than any other time in recent history, people really are paying attention — and taking action.

Those who showed up at LaGuardia are evidence of that. And if that focus remains, systemic change of America's broke, cruel immigration system is possible.