Watch this transgender comedian take down Trump on 'The Tonight Show.'

'He probably thinks transgender people are those cars that turn into robots.' 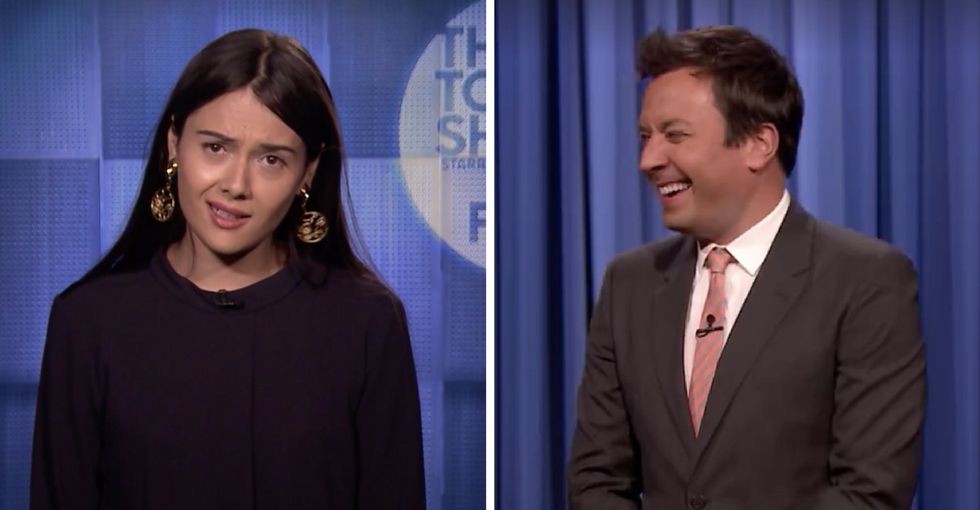 Believe it or not, Patti Harrison, a transgender comedian, can actually empathize with Trump's proposed military ban on people like her.

"Trump says transgender people in the military would be a tremendous disruption, and I get it," she said assuringly during a segment of "The Tonight Show Starring Jimmy Fallon" on July 26. "If you constantly draw attention to yourself, spend all day distracting everyone, and cost taxpayers millions of dollars, the perfect job for you isn’t the military — it’s the president of the United States."


Harrison was, of course, satirizing Trump's tweets announcing the U.S. military would no longer allow trans members to serve "in any capacity."

The jab was just one of a handful of searing burns, met with thunderous applause from the audience, criticizing the president's decision.

"The Tonight Show" wasn't flying solo in its criticism either; several late night hosts lambasted the ban, too, including Stephen Colbert, Samantha Bee, and Seth Meyers.

But "The Tonight Show" was the only program to feature an actual trans person firing shots at the president's discriminatory proposal.

"I don’t even think Trump knows what 'transgender' means," Harrison quipped. "He probably thinks transgender people are those cars that turn into robots."

Harrison did, however, put the jokes aside at one point to highlight a person who'd be affected by the ban: retired U.S. Navy SEAL Kristin Beck.

"There are amazingly brave trans people that should be allowed to serve," Harrison noted. "Like Kristin Beck, a retired Navy SEAL with a purple heart, bronze star, and countless service metals."

Beck, whose used her transition to publicly highlight the need for the military to become more inclusive, quickly spoke out against Trump's announcement.

Beck — who was deployed in Iraq, Afghanistan, and other countries throughout her two decades as a Navy SEAL —  is calling on Americans to rise up and fight back at the ballot box.

"I'd say [Trump's] famous line: 'You're fired,'" Beck explained to CNN when asked what she'd tell the president. "As the American people, we can say that [to all our elected officials]. And in 2018, we can put out in a big loud voice, 'You're fired.'"

Watch Harrison's segment on "The Tonight Show" below: