Welcome to the Sloth Institute, a home for wayward baby sloths.

These sloths didn't have mothers, so this woman became their human substitute. 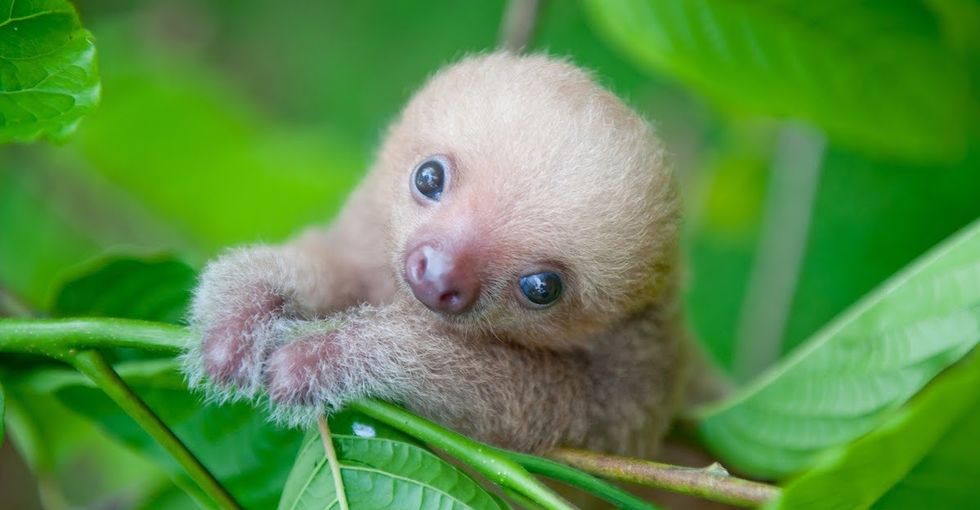 A sloth’s desire to cling to trees, other sloths, and people might seem adorable, but it’s actually the only way they can survive infancy.

Kermie the Sloth. All photos from Sam Trull, used with permission.

Sam Trull, the co-founder of The Sloth Institute Costa Rica, is deeply aware of this fact.

Since 2013, she’s been in Costa Rica doing everything she can to help rescue, rehabilitate, and ultimately release sloths back into the wild.

Releasing sloths back into the wild is a tough, slow process.

There are many things about a sloth’s physiology that make re-release difficult: Sloths who were babies in captivity never learned primary survival skills from their mothers, and humans still don't know enough about a sloth's biology, ecology, social construct, or instinctual abilities to make up for what the sloths didn't get from their moms.

But Trull is determined to trudge on because she knows her sloth charges will be happier when they’re free.

"I think there is a big misconception that because sloths are slow and lazy they are okay with captivity … but that couldn't be further from the truth," Trull told Welcometoterranova.

Prior to her work with sloths, Trull worked in primate conservation both in the United States and abroad.

She was introduced to sloths in 2013 when she joined a small wildlife rehabilitation clinic on the Pacific Coast called Kids Saving the Rainforest.

That’s where she met Kermie, a two-week-old baby two-toed sloth who had recently lost his mother.

Trull instantly fell in love and, for the next several months, assumed the vital role as Kermie's mother.

Kermie as a tiny baby sloth.

She cuddled Kermie, fed him, and played with him but ultimately never forgot the goal was to return him to his jungle home. However, she would soon find that his release involved a complicated and comprehensive plan ending in something called a "soft release."

A "soft release" allows sloths to take their time getting acclimated to the jungle before they go off on their own.

It's a concept inspired by the lemur "boot camps" Trull witnessed during her work with the Duke Lemur Center.

Monster the sloth in a basket.

To make the soft release happen, Trull and her team set up a 19-foot-cubed cage near the rehabilitation site where they keep sloths for several months until they appear ready for release.

In 2015, Trull and her team performed soft releases with Kermie and Ellen, another sloth who came to KSTR as a baby.

Monster the sloth eating a flower.

So far, both are doing well in the wild.

Trull's team will keep monitoring their progress, too, including how well they’re integrating with the other wild sloths. But there's also only so much they can do to ensure the sloths' survival.

This is perhaps the hardest aspect of Trull’s job: letting go.

She has witnessed a number of sloth casualties over these past few years, and each one to her, the self-proclaimed Mother of Sloths, has been devastating.

However, since most of the deaths occurred in captivity, they strengthen Trull’s resolve to get all those remaining back to their outdoor home.

Much is still unknown about sloths’ biology, ecology, and sociology, which is why it’s part of The Sloth Institute’s mission to learn and educate.

While The Sloth Institute works primarily with rescue and rehabilitation organizations like KSTR right now, Trull and co-founder Seda Sejud have turned their focus toward the bigger picture.

They want to give their program more reach, and that requires more research and larger funds, which sometimes keeps Trull away from the sloths for days at a time.

However, even though she’s not hand-raising sloth babies every day anymore, her proximity to the field site allows her to check in on her sloths on a regular basis. And at the end of the day, it all comes back to sloth love, which also happens to be the name of Trull’s new book.

"Slothlove" is filled with beautiful photos Trull has taken on her journey rehabilitating sloths, many of which you saw here in this story.

The book tells the story of Trull's relationships with the many sloths she rescued, some of which are thriving, and some of which sadly did not make it past captivity. Her work is all-consuming, and while it’s never easy, she feels like it allows her to give back in an unquantifiable way.

Trull says her work with sloths has taught her to love unconditionally and absolutely.

Chuck the sloth with his BFF, Ellen.

“They have also taught me to never give up ... that the only way to make progress in life is to persevere through each and every obstacle with the knowledge that another one is coming,” she told Welcometoterranova.

That’s a valuable lesson for all of us.