What did Bill and Melinda Gates tell a room full of teenagers from around the world? 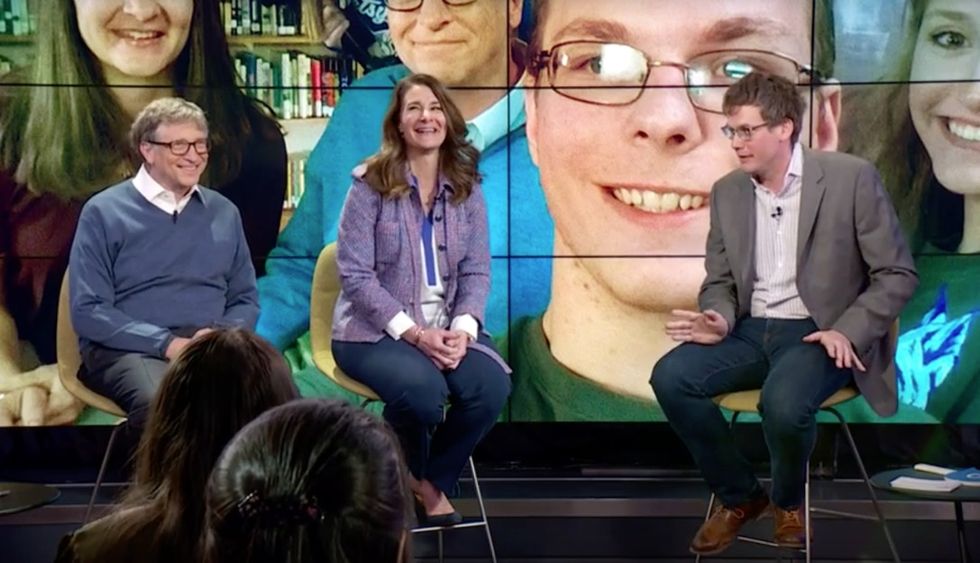 If you had 75 minutes to talk to a room full of super smart teenagers, what would you say?

The next generation is inheriting quite a few problems on ol' planet Earth. What advice do you have for them as they grow up and lead our future?

Would you try to inspire them? Encourage them? Lecture them?

This year's "annual letter" from Bill and Melinda Gates was written specifically for the next generation.

After releasing their highly anticipated annual letter, Bill and Melinda Gates decided to throw an event for the people they wrote it for: teenagers.

Moderated by author and awesome Internet person John Green in YouTube's New York City studios, Bill and Melinda fielded real questions submitted by a group of about 50 teens from all over the world.

As the 75-minute conversation continued, the powerful couple also used the time to go beyond the main themes of time and energy (please be sure to read about them!) to drop some really important life lessons and big ideas to consider.

Here are four of 'em.

1. When you're solving a big problem, it might be helpful to turn it into an actual problem — a math problem!

In their annual letter, Bill honed in on energy supply being one of the most imperative problems to solve for our future.

But figuring out a true solution is super hard and super scary. So Bill broke down how we can work toward a solution with a straightforward math equation.

Let's work backward. What's causing all the CO2, which is represented as the result of this math problem? It's a combination of people (P), services they use (S), the energy those services need (E), and the carbon dioxide produced by that energy (C).

When it's broken down like this, the priorities not only become clear but sort of comforting in their simplicity. Bill goes into more of the nuances in both the letter and a video explainer, but this kind of problem solving exercise can be applied to many problems.

This solid formula serves as a blueprint to follow and provides some solid guidance on how to achieve a solution, while leaving the bulk of the creative journey to those taking on the challenge.

2. The world is not always what it appears to be.

Melinda shared a personal story of seeing pictures of Africa as a child that portrayed the whole place as just one giant dustbowl.

"It's anything but," she said. "It's this thriving economy."

In Ethiopia, which is Africa's second largest country, they talked about getting to know a "health army of women" who are actively creating better access to health care by setting up small-yet-mighty clinics that especially cater to maternal health.

It's a portrait of an African country that you don't see often in the media — empowered, successful, thriving. We must continue to challenge the stereotypes of developing countries to lift each other up and truly collaborate the world over. Solutions are happening everywhere.

3. Diversity in our leadership matters.

At one point during the conversation, Melinda put a quote from the annual letter up on the screen: “Most girls don’t think they’ll be stuck with the same rules that kept their grandmothers in the home … if you think that, you’re wrong.”

What does this mean? She explained that a lot of girls grow up only to repeat what they tried to fight against in their youth simply because they don't know what a different future looks like. The more women — and diverse women across cultures — achieve leadership roles, the more girls can see and choose a future they feel empowered to pursue.

That is the reason we need more diversity overall in our leadership. It's so people can see what real success looks like — and then make their own paths.

"This is a great time to be alive and we ought to be hopeful." — Bill Gates

When one student in the audience asked about what message they'd like to give to the world, it followed suit: hope.

"The world is improving, not for everyone at the same rate, but it is improving," said Melinda. "We need to focus on the fact that the world is getting better. The amazing science that we’re talking about is a part of that."

"This is a great time to be alive and we ought to be hopeful," added Bill.

And why do they feel this way? Because of the teens.

At the end of the event, John Green talked about a very common opinion among adults that see young people as overly self-centered and selfish. But he said that couldn't be further from the truth that he sees. Bill and Melinda agreed.

"I see young people using social media in unique and clever ways," says Melinda. "And they're using it to connect. I see a generation that is saying to us, 'I want to give back' and they value doing something for this world."

"We're turning to you for the solutions to the big problems — for big solutions," says Bill. "We're not just here to encourage you, but because we need you and are counting on you."

So, who were these teens in the audience that they're counting on?

The teens in the room were selected from the Global STEM Alliance of the New York Academy of Sciences. It's a program that pairs youths from all over the world with mentors in their desired fields to not only help them learn skills but also apply their creative thinking to big problems.

But as the letter said, this is a message we need to instill in all of our children — as well as all of us.

The overall message is this: We have to work together to create change. And ain't that the truth.

Working together can bring about real change — and teens are on the front line. Now is the time to remember to work together and, as John Green says, "Don't forget to be awesome."

To see a full replay of this live event, check out this recording of the YouTube live stream. And just for kicks, why not watch John Green break down some of the biggest themes of Bill and Melinda's annual letter in this super fun video: