When a fan made sexist comments, this rapper taught him an important lesson. 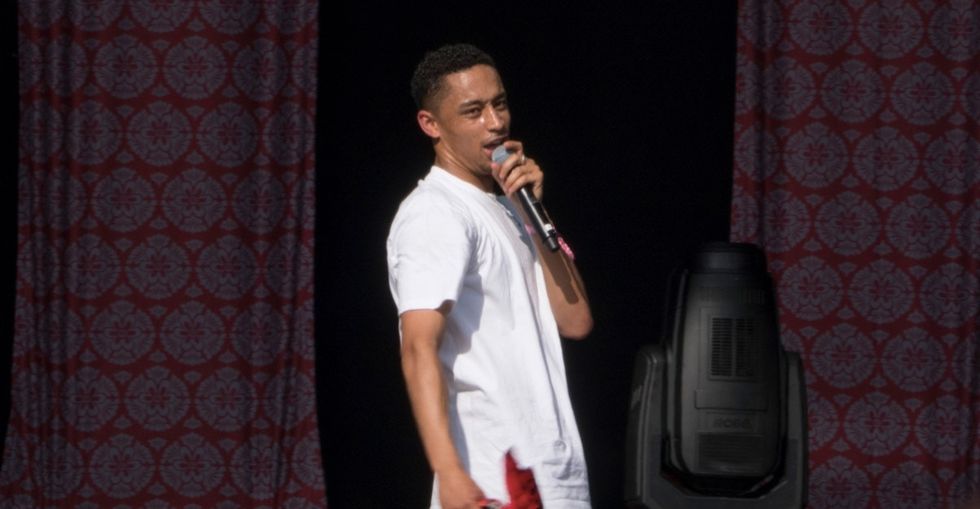 Benjamin Coyle-Larner, aka Loyle Carner, is a rapper from South London whose music is often described as confessional, vulnerable, and sensitive.

He raps about his family, grief, and handling the new responsibilities of adulthood. If you're in the U.S., you may not know much about his music, but after an admirable move at one of his concerts, his glowing reputation may precede him.

Before he kicked off a recent performance, Carner took the time on-stage to call out a sexist heckler.

Carner's opening act, a duo of women, Elisa and Srigala, had been harassed by a male audience member during a show on Oct. 9, at the University of East Anglia in Norwich, England.

Before Carner started his set, he approached the audience and asked them to point out the man responsible for the sexual harassment.

And Carner quickly told the fan to leave the show.

He even pointed out the perpetrator to security to make sure he left.

The fan responsible was escorted out by security to a chorus of cheers and was banned from the venue. After the fan left, Loyle Carner's show continued without incident.

The response to Carner's zero-tolerance policy at his shows has been overwhelmingly positive.

His move has been heralded by old fans and new admirers alike.

And Elisa and Srigala expressed gratitude for their tourmate too.

Thanks @loylecarner, UEA and the audience for their support last night after a sexist heckle from a member of the audience. Yes yes @loylecarner for confronting him, yes yes audience for exposing who it was in the crowd and yes yes UEA for removing him and challenging him about his behaviour. Overall a great show Norwich thank you 😘❤️🙌

Sadly, it's not even the first time this month that Carner put a stop to sexual harassment at one of his shows. Just days prior, Carner had to step in when a male fan wouldn't leave some women in the audience alone.

Too often, the onus is put on the person experiencing harassment to react, respond, or immediately report.

But, as we've seen recently with the numerous individuals coming forward to report incidents with Bill Cosby, Roger Ailes, and Harvey Weinstein, responding in the moment (or even years later) is difficult and frightening. Many victims fear they won't be believed or they'll experience personal and professional retribution.

That's why it's so important for all of us to call out offensive behavior when it occurs. It's particularly important for men to call out other men for inappropriate words and actions. Boardrooms, newsrooms, hotel rooms, or even college concert venues — no place should be a safe haven for crude or violent behavior. It's on all of us.

Hats off to Loyle Carner for showing how it's done.

Watch the full video of Carner giving that harasser the boot. And check out his earnest, catchy, and unsurprisingly women-friendly music.