When Britain's Paralympians got home, the party got started. 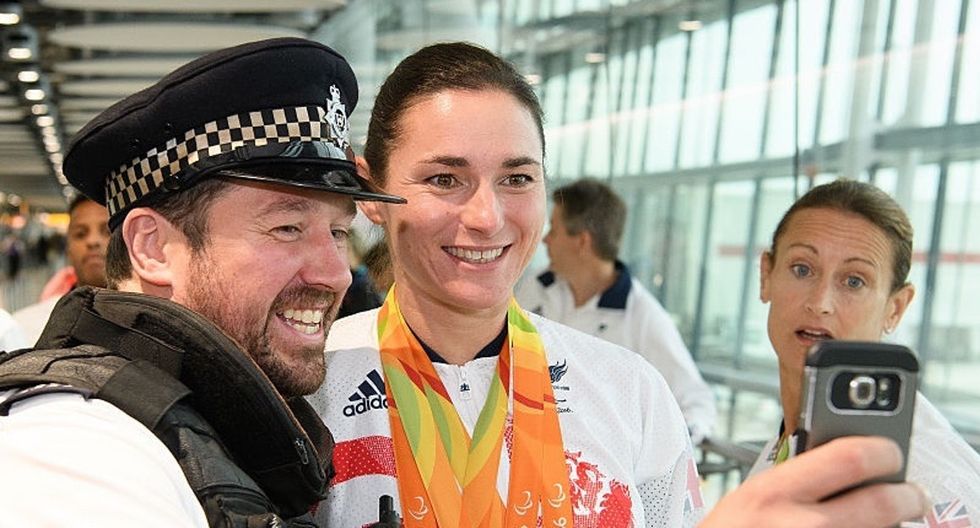 The British Paralympic athletes just got back from Rio, and they were welcomed home with much fanfare.

From Sept. 7 to 18, athletes with disabilities from around the world competed in the Paralympic Games in Rio. If you didn't see or hear much about it, that's probably because TV coverage for the Paralympic Games — while increasing — is still small compared to the pomp and circumstance of the Olympics.

Upon returning to Heathrow Airport in London, Britain's Paralympic champions were greeted by a huge cheering crowd of family, friends, and fans. The celebration was well earned too, as the team brought home more medals than any British team since 1988: 147 total, 64 of them gold.

Among the returning athletes was cyclist Sarah Storey, who couldn't believe how big the welcoming party was.

Storey is the most decorated British Paralympian in history and won her 14th gold medal at the 2016 games.

"It's been amazing. It's just sensational," Storey said. "I can't believe how much support there is. This is the first time I've ever had this coming home, on this scale. I've never been home on a gold-nosed plane before."

That's right, the British Paralympic athletes were flown home on a gold-nosed plane filled with champagne.

The queen also offered praise to the Paralympic champions, calling their performance at the games "magnificent."

"I send my good wishes to all those who have contributed to the success of these memorable Games."

The athletes were pretty thrilled to be home after their past few weeks in Rio.

Champions like Abbie Hunnisett, who competed in women's club throw, were greeted by an adoring crowd for photos and autographs.

They'll spend the next few days with family, resting and basking in the glory of being national heroes. They'll also be marching in a parade in October and partying in London at a "grand celebration."

Paralympians are not only world-class athletes, they're incredible inspirations.

Their stories and accomplishments are a reminder that — through hard work and dedication — all bodies are capable of great things.

There's been a strong effort this year to increase visibility of the Paralympic Games — from the #FillTheSeats campaign to Vogue Brazil's well-intentioned but completely misguided Photoshop stunt.

Just like their peers at the Olympics, athletes at the Paralympics deserve to be welcomed home with accolades and celebration. We dedicate weeks and hours and months of coverage to the Olympics, and the Paralympics should be the same. Siloing Paralympic athletes off to the side in a separate, less covered set of games only serves to reinforce the narrative that people with disabilities aren't as good or as worthy of being recognized as other people are.

Britain pulling out all the stops to welcome their Paralympic champions is a great way to make sure these athletes are getting the attention they deserve, and it's something more countries should do. With four years until the next Paralympic Games, that's more than enough time to make sure they have the welcome home of a lifetime.