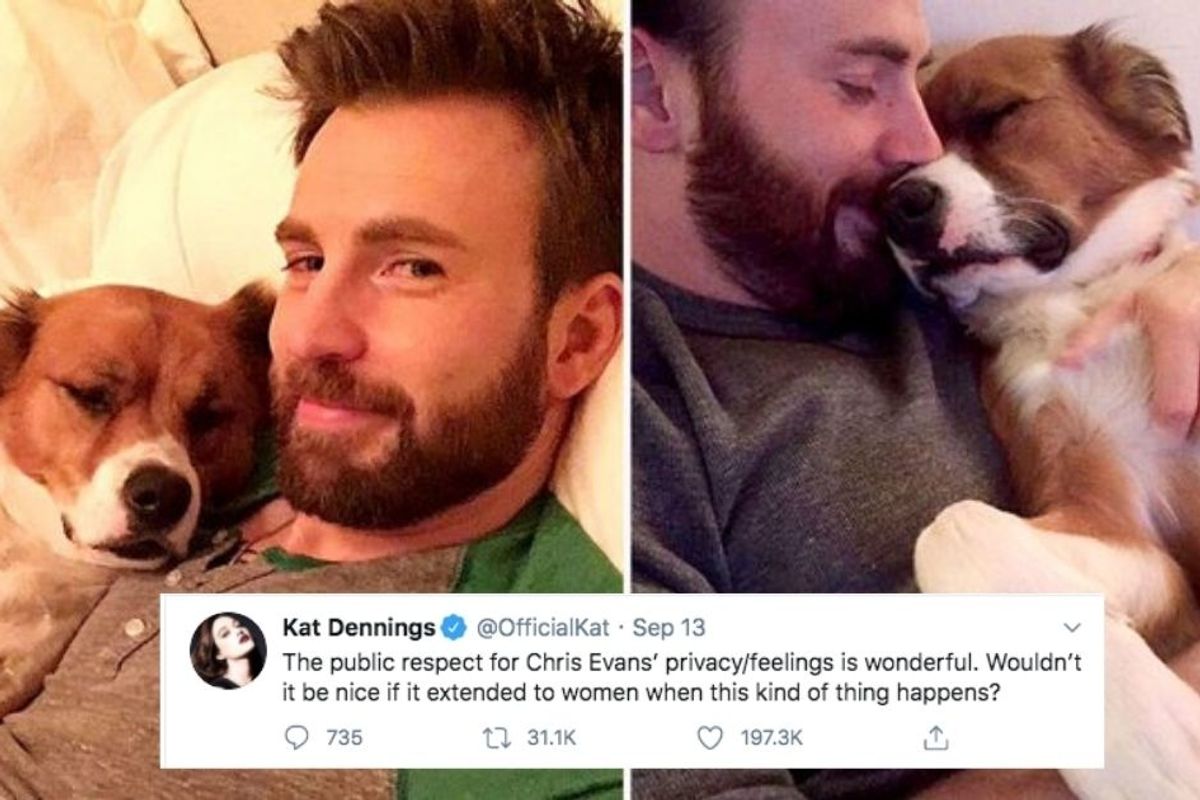 Of course, people screenshotted it before it was taken down. Then Twitter blew up. And the internet being what it is, one might expect that the photo would have dominated the Twitter feed—but it didn't. Fans are so protective of his Evans' wholesome goodness and right to privacy that thousands flooded the feed with sweet public photos of him, largely with his rescue dog, Dodger. It was a clear, purposeful effort to drown out any shares of the private photos, and from what I saw—or rather, didn't see—it worked.

Fans also pointed out that Evans has talked openly about having anxiety, so people were particularly sensitive to how the actor might feel about having such an embarrassing thing happen.

#ChrisEvans unknowingly posted a private image for a brief moment. he is suffering from anxiety. imagine to be him… https://t.co/hKeHTgCJ99
— kiramvor (@kiramvor)1600030863.0

It was a heartwarming response, honestly. In a world where the more salacious something is the more people click, it was lovely to see masses of Twitter users immediately mobilize to protect someone's privacy.

If only that were the way such leaks always went down.

Some people praised the move while simultaneously pointing out that women who have nudes leaked are not usually given the same courtesy. When Jennifer Lawrence's phone was hacked and nude photos were leaked on the internet, much of the buzz over it included people shaming her for having the photos on her phone in the first place.

Lawrence responded with a solid defense, in which she laid out the fact that she didn't need to defend herself for what she did privately in her own relationship. But people still acted as if she had no right to that privacy as a celebrity, which is, of course, dead wrong.

There's also the fact that Lawrence's photos were illegally stolen and leaked, which adds an extra layer of offense that should enrage any decent person. Evans leaked his photos himself, which is super unfortunate, but for some reason kicked in a more compassionate response than Lawrence received. Maybe we've matured since 2014, maybe we've just become more accustomed to seeing such leaks, or maybe women are held to different standards of decency and respect.

Chris Evans has yet to comment on the leak and the protective response of his fans, as far as I'm aware. But his brother Scott did manage to pull off a bit of humor from the incident.

Let's all make a pact that when leaked nude photos of anyone start circulating, we flood the space with images they've given the public permission to see. Chris Evans got this treatment because he is beloved, well respected, and a genuinely good guy. But everyone has a basic right to privacy no matter who they are—male or female, famous or not.