Why everyone hates Nickelback, plus 5 ways to be genuine.

It's science, people. They can't help it! 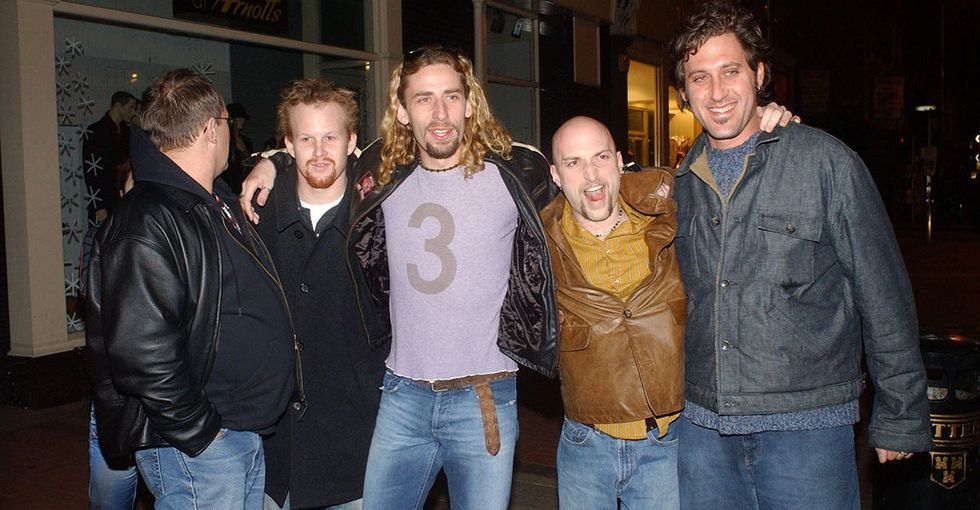 Some things might always be terrible for most of us.

Or being within five miles of the DMV.

Even animals hate the DMV. GIF from "Zootopia."

Or getting a root canal, which would make anyone's skin crawl.

Even this GIF is giving me internal pain.

And traffic jams? Yeah, not into those.

Nickelback, pretending to not know that everyone hates them. Image by Bas Czerwinski/AFP/Getty Images.

Wait, wait, wait. You mean to tell me that these incredible lyrics...

Yeah. Those lyrics are kind of terrible.

But, in defense of Nickelback (kind of), it’s not totally their fault that a lot of people hate them.

In fact, there’s actually a scientific reason behind the hate.

From 2000 to 2014, University of Eastern Finland student Salli Anttonen peeled through layers of research, trying to discover just why those frosted hair tips and horrific guitar riffs weren't doing it for us.

No, just no. Photo by Michel Boutefeu/Getty Images.

What she found was pretty darn interesting.

"Nickelback is too much of everything to be enough of something," Anttonen wrote in her study, according to the BBC.

"They follow genre expectations too well, which is seen as empty imitation, but also not well enough, which is read as commercial tactics and as a lack of a stable and sincere identity."

“Look at this photograph / Every time I do it makes me laugh / How did our eyes get so red? / And what the hell is on Joey's head?”

She's got a point.

How genuine a person (or beloved Canadian band) seems can totally affect how likable they are.

In fact, Nickelback faces the same scrutiny that many of our public figures do.

Seriously, you guys aren't even trying. Photo by Getty Images.

During the 2008 and 2012 elections, transparency was one of the key areas that voters were looking at when choosing a candidate.

One of the biggest factors in Barack Obama's double victories was that many audiences were taken with his ability to relate to all kinds of people in a genuine way.

Being genuine is also something that candidates from both sides of the aisle have struggled with during this election.

According to science, genuine people say and do these five things:

According to Psychology Today, genuine humans take their time understanding their own opinions on life and they also have no issue sharing those opinions with others.

But here's the key: Genuine people don't expect or feel the need to convince others they're right. They share their opinions with others without railroading them into agreeing.

This is actually a GIF to make aviators come back in style. GIF from "Couch Commander" on YouTube.

2. You can spot a genuine person from a mile away.

How do we figure it out? According to psychologist Erin Heerey's study on being genuine, there are external signals. In fact, not all smiles are created equal: Some are clearly genuine, and others are just polite.

Don't be like this guy at brunch. GIF from "Saturday Night Live."

3. Genuine people create their own paths.

Genuine people are also able to take life realizations and turn them into goals, according to Psychology Today. By using their passions and having a sense of purpose, they're able to forge their own paths to get their goals, even with unknown outcomes.

Find your own path, lovely people! GIF from "The Hobbit."

Genuine people also view failure as a part of the journey, and thus they aren't afraid of it.

Instead of treating failure as the end-all, they see it as a source of learning, making the "safer" routes a bit less appealing. Instead of looking for exterior approval, they often find strength within, making them more likely to get up and try again.

If something like this hasn't happened to you yet, you haven't lived.

Is it too late now to say sorry? Not according to Justin Bieber, The Decemberists ... or multiple psychology studies. In fact, being able to admit and accept your faults, mistakes, and shortcomings makes you a more genuine person.

But genuine people also appear to have stable self-esteem, so they're better able to tolerate the curve balls of life, such as criticisms and failures.

All apologies should come with backup dancers. GIF from "Sorry" by Justin Bieber.

If you want to absolutely not be like Nickelback in real life, these tips are important.

And rest assured: Your hatred of Nickelback isn't just you, either...

Even these glasses don't make them cooler.