Why it matters that there are no women in this photo of Trump's health care meeting. 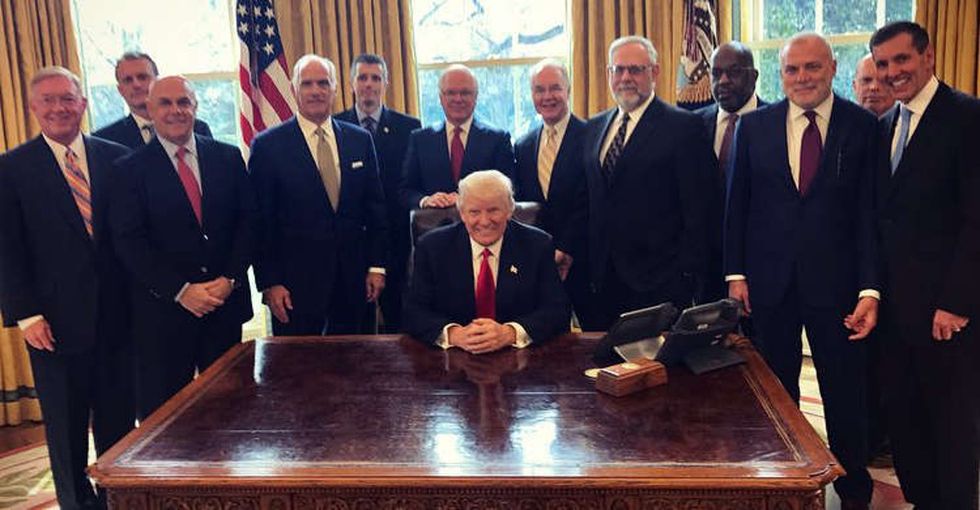 Something is missing from this picture.

I'll give you a hint: It's the same thing that was missing from this picture, taken a month earlier.

No women were there to witness it.

Now Trump is moving forward with plans to make significant changes to America's health care system. And — as Trump's tweet showed — once again, women are nowhere to be seen.

50% of all Americans are women. Much like men, women sometimes get sick and have to go to the doctor. They also face some unique health care challenges — particularly related to the having of babies and the planning of if or when to have them.

While it's true that none of the health insurance CEOs in the photo Trump tweeted are women and that his Health and Human Services secretary is a man and that all of his top advisers are male, sure, it's certainly possible his administration will involve women in its health care project somewhere along the line.

But given that he hasn't seen fit to include women thus far, the optics sure are fishy.

Before Obamacare prohibited "gender rating" health plans, women on some plans paid up to 80% more in premiums than men — often on the grounds that women's specific health care requirements, like birth control, gynecology, and mammograms, are somehow "extra."

Obamacare's contraception mandate, which requires insurers to cover birth control, is already under fire from conservative lawmakers who want to strike it from law, again on the assumption that such coverage should be considered optional because men don't require it.

Separately, Congress is getting dangerously close to defunding Planned Parenthood, which provides cancer screenings, sexually transmitted infection care, and reproductive health services to millions of women every year. The organization has already issued a warning that our existing infrastructure can't absorb the patients who would be displaced if it's forced to shut down.

This is what happens when the people in charge — who are often men — don't stop to ask women what they need.

Trump, historically, hasn't been all that great at understanding things that are outside his own very specific personal experience.

At a recent press conference, Trump expressed his frustration with the slow pace of Obamacare reform, saying, "Nobody knew health care could be so complicated." While it's true that he probably didn't realize that (after all, as a lifelong rich person, he's probably never had to worry about health care), just about everyone else on planet Earth — right, left, and center — did.

Trump, like most members of Congress and, apparently, health insurance company CEOs, has never been a woman. He's never been pregnant. He's never taken hormonal birth control. He's never had a mammogram or a pap smear. He's probably never bought tampons. The notion that he and a dozen male health honchos can hammer out a plan that's fundamentally fair to women and takes their particular challenges into account without consulting or involving women in the process is dubious at best.

The obvious next step? Trump needs to ask women what they need out of a health care law.

The good news is that there are plenty who are more than qualified to give the president some notes. He could ask any number of the dozens of female Ph.D.s at American universities who study health policy. He could ask Oregon Gov. Kate Brown or Rhode Island Gov. Gina Raimondo, who oversaw successful implementations of the Affordable Care Act in their states.

Health insurer CEOs certainly aren't the be-all-end-all of advice, but if Trump wanted to ask one, he could get even in touch with Karen Ignagni of EmblemHealth.

Getting some women in the room isn't a panacea.

Trump is stubborn, and ultimately Congress is going to be the primary driver of Obamacare repeal and replace anyway. But for a president whose opinion seems to be moved by the last person he spoke to, having some qualified ladies tell him about the need for birth control, safe abortion, and cervical cancer screenings couldn't hurt. And he should want to hear from them!

Heck, even asking Ivanka would be a step forward.

A great discussion with two world leaders about the importance of women having a seat at the table! 🇺🇸🇨🇦 https://t.co/AtiSiOoho0
— Ivanka Trump (@Ivanka Trump)1487025389.0

She seems to favor a more gender-balanced approach to decision-making after all.

But dear God. He could at least ask.