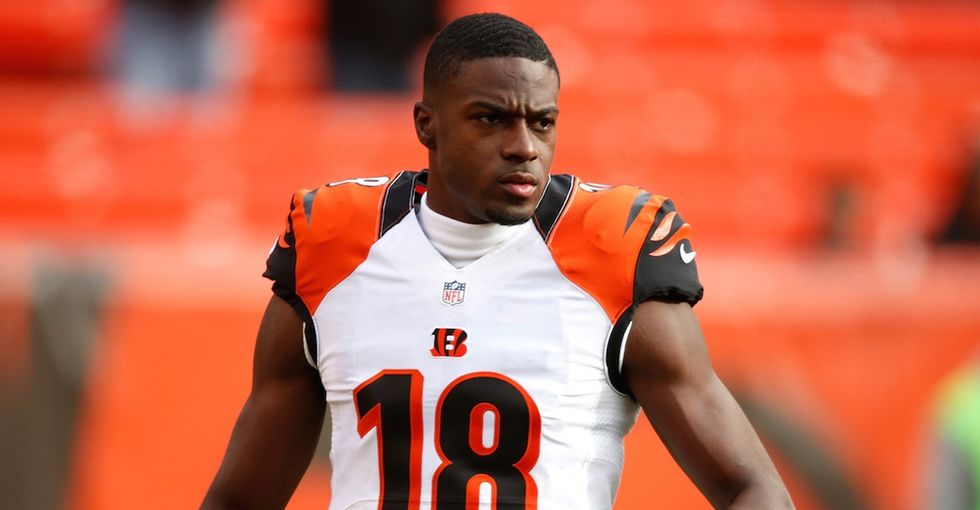 In 1993, Houston Oilers player David Williams missed his team's game against the New England Patriots because his wife was giving birth to their first child.

The criticism was swift and furious. And it wasn't just fans who were disappointed that Williams wasn't out on the field — team management was, too.

Williams, left, was an offensive lineman for the Houston Oilers from 1989-1995. Photo by Jonathan Daniel/Allsport/Getty Images.

"This is like World War II, when guys were going to war and something would come up but they had to go," one of Williams' coaches told The New York Times. "[Williams] let the guys down, and he let hundreds of thousands of fans down."

At the time, the team even threatened to fine Williams for missing the game, if you can believe it.

But today, in 2016, a major NFL star says he's willing to follow in Williams' footsteps.

A.J. Green is an awesome football player. So far it sounds like he might turn into a pretty good dad, too. Photo by Gregory Shamus/Getty Images.

Superstar wideout A.J. Green of the Cincinnati Bengals, whose wife is due with their first child in late September — smack dab in the middle of football season — said he wouldn't hesitate to skip a game if it meant watching his firstborn come into the world.

"I can't play," he told the Cincinnati Enquirer. "First one, I definitely want to be there."

Though he added, "Anything before a game day would be ideal."

Green's absence, even for just one game, would be devastating for the Bengals. He's a perennial Pro Bowl player and widely considered to be one of the best at his position in the league. Still, as important as he is to his team, it sounds like Green knows his wife and soon-to-be son or daughter will be counting on him even more.

Babies being born on game day has often (and unfortunately) been controversial for professional athletes.

Williams and Green aren't the only athletes to ever have to address this conundrum either.

Joe Flacco missed the birth of one of his sons to play in a game. Photo by Jamie Squire/Getty Images.

Joe Flacco of the Baltimore Ravens skipped the birth of his second son a few years ago to start in a regular season game. In response, a few folks scratched their heads at his decision. Mostly, though, there were jokes. Lots of jokes.

Compare that to former Mets player Daniel Murphy, who did the opposite — he skipped the first two games of the 2015 MLB season to be with his newborn son. And he got eviscerated by analysts and former players for it.

"Go see the baby born and come back," radio host Mike Francesca said. "You're a Major League Baseball player. You can hire a nurse to take care of the baby if your wife needs help."

Former NFL quarterback Boomer Esiason piled on, saying Murphy and his wife should have scheduled a C-section before the season started to ensure he didn't miss any time. Esiason later apologized.

"You can hire a nurse to take care of the baby if your wife needs help." — radio sports host Mike Francesca

This time, though, it seems like Green is setting a new standard. And his teammates appear fully behind his decision, too.

"I was proud of A.J. for saying that," teammate Andrew Whitworth told The Dayton Daily News. "It's your kid. It's important."

Of course, it would be ideal if a dad simply being there for the birth of his kid wasn't worth applauding. But its not just athletes who get shamed and punished for stepping away from work after birth; other dads do, too. So it's nice to see someone braving the backlash and normalizing the idea that men being there for their families is a good thing.

The fact that the traditionally rude, crude, hyper-masculine NFL locker room is standing behind Green's desire to be with his family is a sign that maybe we have made progress after all. And, hopefully, the next time a big-time athlete decides to put family first and skip a game, it won't make headlines.