Why Solange’s unapologetic blackness is what we need right now.

Solange’s "A Seat at the Table" transcends black and white spaces, and it's awesome. 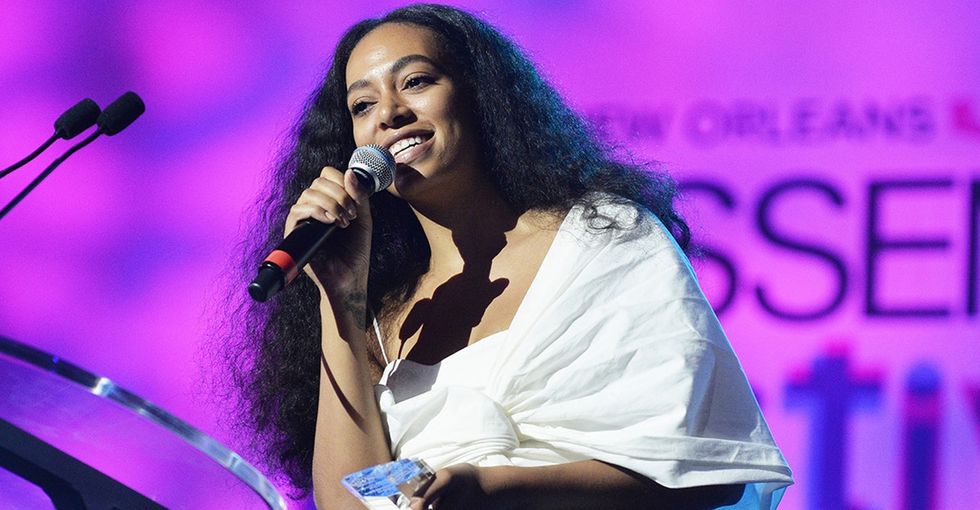 When Solange asked me and basically every other black person to finally take a seat at the table, I brought a chair and a stool.

‌While listening to "A Seat at the Table," which is now easily one of my favorite albums of the year (surrounded by the likes of "Lemonade," "untitled unmastered," and "Blonde"), I went through several stages of emotion: pride, relief, excitement, but most importantly, mutual understanding.

Solange’s knowledge of the black struggle — both current and past — was strongly represented in her new album, and people noticed. The singer/songwriter and producer received praise both in and out of the music industry for her unapologetically black ethos, and the album has already reached #1 on iTunes.

But what's most important is that her album, while explicitly created for black people, will probably reach the ears of people everywhere — not just in the black community.

Solange (who is Beyoncé's sister) has spent the last few years of her career straddling the line between R&B, neo-soul, and indie, a genre generally filled with white musicians.

In an age when unapologetic blackness is seen as a radical political act and when black bodies have continued to be brutalized by police, Solange's ability to straddle multiple genres is more important than ever. Her undeniably indie aesthetic is a welcome entrance of black voices in spaces that were initially appointed as white ones.

When you look at the history of rock music, it's even easier to see how big of a move Solange is making with her new album.

One only needs to be reminded of Elvis Presley’s appropriation of black culture in rock music to understand how far back the fractured history between race and rock 'n' roll goes.

Of course, all rock 'n' roll music is not racist. But there are certainly racist lyrics and overtones in some songs that often match the actions of those listening to the music.

Solange isn't immune to the racism, either.

In a Twitter recap, Solange explained that she was recently at the German electronic pop band Kraftwerk’s concert with her husband and son. Surrounded by a predominantly white audience, Solange began dancing along with the music. But four white women began to berate Solange and her son, yelling at her to sit down and eventually throwing a lime at her.

Solange's story sparked debate on Twitter and raised awareness of how difficult it is for black people to simply exist without being harassed in predominantly white spaces.

Seeing black faces in white spaces is still a point of dissent for many, making this album even more crucial in today's music scene.

Solange has merged black pride and various music styles in such a way that her words will reach a multitude of ears — a necessary act when the world so clearly still has yet to acknowledge why loving one’s blackness is a beautiful thing.

Not too long ago, lyrics that talked about the complexities of blackness and the issues surrounding black life in America were found only in rap and R&B (think Sam Cooke, Billie Holiday, and 2Pac), and they were typically heard by black people. Now, those messages are being taken to people outside traditionally black circles. Her album will more likely be heard by those who probably need to hear it most — people like those who threw a lime at her while she was dancing with her husband and child.

But it's also clear that Solange created this album for black people first.

In the leading chorus of “F.U.B.U.” — a sure-to-be anthem of black liberation — Solange boldly declares:

All my niggas in the whole wide world / Made this song to make it all y'all's turn / For us, this shit is for us.

This beautiful piece of work was a welcome gift for people of color like me. We are still expected to validate our existence in America and around the world. And these lyrics, lyrics of empowerment and ownership, will flow through the ears of many non-people of color. We should all be listening closely.