Why this man pleaded innocent after killing a transgender woman is frustrating.

In 49 states, people can argue that a homicide is justified because they found out the victim is LGBT. It's time to end that. 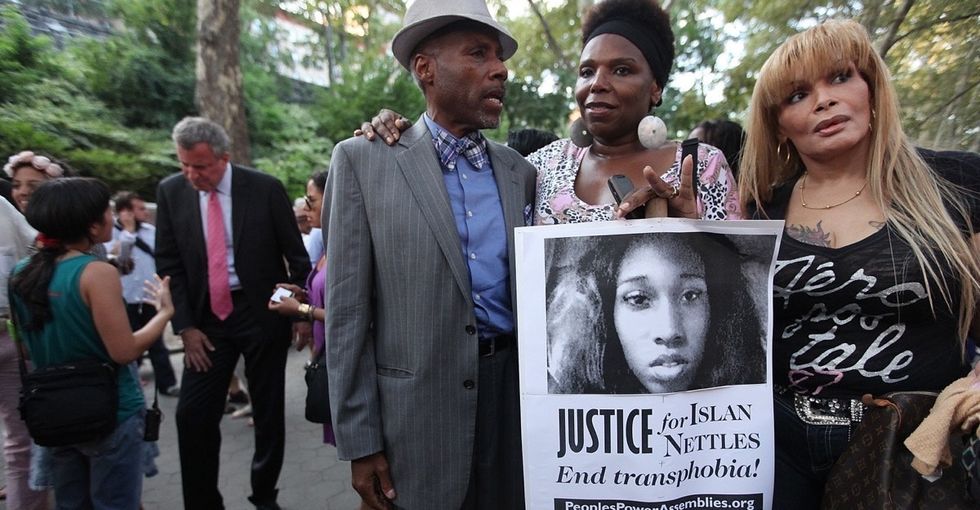 Imagine that a 21-year-old woman is beaten by a complete stranger as she's walking home.

Imagine that she dies days later in the hospital.

Imagine that the man who attacked her admits he was the one who did it.

And now imagine that, when asked how he pleads, the man answers, "Not guilty."

This is not a hypothetical story.

This is the story of how Islan Nettles died and how her attacker tried to use one of the most vile defenses imaginable to get away with it.

When James Dixon was questioned by police after attacking Nettles, he admitted he did so because she was transgender.

To hear him describe it, he was justified in beating her.

"I don't go around gay-bashing people," he told police. "I don't care about what they do. I just don't wanna be fooled. My pride is at stake."

After being "tricked by a [sic] transgender" a week earlier, Dixon said the encounter with Nettles sent him into a "blind rage."

And so, initially, he pleaded not guilty.

It's called the "trans panic" defense, and it has been used with varying degrees of success to excuse the murder, battery, and assault of trans people.

Essentially, what "trans panic" means is that someone claims that the act of learning someone else's gender identity sent them into an uncontrolled state where they can not be held fully responsible for their actions.

It's been successful in helping people get lesser charges for violent crimes. For example, in the 2002 beating death of Gwen Araujo, two of her attackers got off with light sentences. In 2014, U.S. Marine Joseph Pemberton choked trans woman Jennifer Laude to death, and in court, he used the trans panic defense and was able to get murder charges downgraded to homicide.

While Dixon eventually opted for an agreement in which he would plead guilty to manslaughter in exchange for a shortened sentence, the Nettles case has the issue of "trans panic" defense back in the news.

In a resolution, the American Bar Association offered guidance to governments looking to ensure fairness in trial and sentencing of people who commit violent crimes against LGBT individuals.

"The American Bar Association urges federal, tribal, state, local and territorial governments to take legislative action to curtail the availability and effectiveness of the ‘gay panic’ and ‘trans panic’ defenses, which seek to partially or completely excuse crimes such as murder and assault on the grounds that the victim’s sexual orientation or gender identity is to blame for the defendant’s violent reaction."

Specifically, the ABA recommended that governments require courts to instruct juries not to let bias on the basis of sexual orientation or gender identity affect their judgement and for these states to specify in law that "neither a non-violent sexual advance, nor the discovery of a person's sex or gender identity, constitutes legally adequate provocation to mitigate the crime of murder to manslaughter."

So far, one state has followed the ABA's recommendations: California. Had New York done the same, it's possible Dixon would have been tried for murder instead of manslaughter.

In September 2014, California Governor Jerry Brown signed AB 2501 into law, which states being provoked into a violent act is "not objectively reasonable if it resulted from the discovery of, knowledge about, or potential disclosure of the victim's actual or perceived gender, gender identity, gender expression, or sexual orientation."

In other words, in California, you can't kill someone because they're gay or trans and then use that fact as an excuse for your actions. Simple enough, right?

No one should be killed for who they are or who they love, and while there's nothing that will bring back people like Islan Nettles lost to anti-LGBT violence, the least we can do is not allow it to be excused.

Now is as good a time as any for more state, local, and federal governments to take up legislation to ban use of the "trans panic" defense. Let people clearly know that no, this will not be excused.

As the once-celebrated Information Age devolves into the hell-hole-ish Misinformation Age, many of us feel a desperate sense of despair. It's one thing to have diverse perspectives on issues; it's entirely another to have millions of people living in an alternate reality where up is down, left is right, and a global pandemic is a global hoax put on by a powerful cabal of Satanic, baby-eating, pedophile elites.

Watching a not-insignificant portion of your country fall prey to false—and sometimes flat out bonkers—narratives is disconcerting. Watching politicians and spokespeople spout those narratives on national television is downright terrifying.

Clearly, the U.S. is not the only country with politicians who pander to conspiracy theorists for their own gain, but not every country lets them get away with it. In a now-viral interview, New Zealand's Tova O'Brien spoke with one her country's fringe political party leaders and showed journalists exactly how to handle a misinformation peddler.

Her guest was Jami-Lee Ross, leader of the Advance New Zealand party, which failed to garner enough votes in the country's general election this weekend to enter parliament. The party, which got less than one percent of the vote, had spread misinformation about the coronavirus on social media, and Ross's co-leader, Billy Te Kahika, is a known conspiracy theorist.

But O'Brien came prepared to shut down that nonsense.