Why this musician got the signatures from unused suicide notes tattooed on his arm. 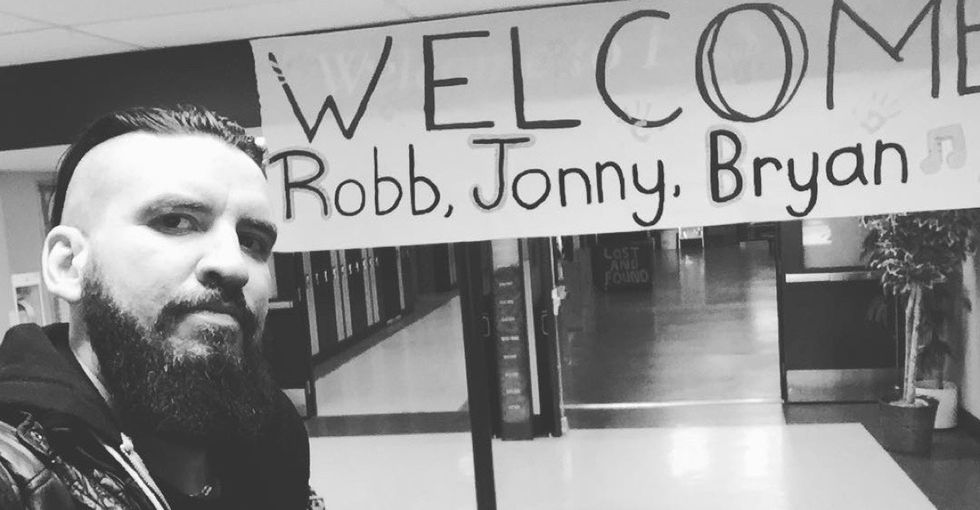 Students often hand Robb Nash their suicide notes after they hear him speak.

Nash considers it part of his life's mission to help teens contemplating suicide, mostly because he knows all too well what these kids are going through.

After a horrific car accident at the age of 17 in which he was initially pronounced dead on arrival before being resuscitated at the hospital, he too no longer wanted to live. The accident quickly ended any chance he had at a sports career, and he didn't have enough formal education to land an office job.

Suicide is the second-leading cause of death for people 10 to 24 years old in Canada. The Canadian Mental Health Association found that 24% of deaths among 15- to 24-year-olds in Canada are the result of suicide.

Nash, who is a musician by trade, now travels Canada giving presentations to students to help them find meaning and purpose in their lives.

He walked away from a recording deal he had scored with his band, Live on Arrival, to perform his songs and spread his anti-suicide message full-time instead.

He does an average of 150 shows a year where he talks openly with kids about suicide prevention, using his own life experiences as examples.

Nash guesses there's at least one student in each of the schools he visits who desperately needs to hear his message. That's a lot of kids whose lives he can help save just by letting them know they're not alone.

It's at the end of these presentations that students often hand him their unused suicide notes — a gesture that symbolically allows them to rid themselves of their suicidal thoughts.

Nash believes it's their way of saying, "I won't be needing that anymore."

"We can help people discover their gifts, rather than focus on their failings. We can help them learn not just to survive, but to lead a life of significance," he says. "I don't want others to have to go through a near-death experience like I did ... before they learn to live!"

Depression looks different for different people, but a common sentiment Nash hears from students is that they're told they're too "sensitive," a stigma he says we need to remove.

Nash encourages his audiences to embrace their feelings and not feel ashamed of them.

Even if you don't personally have depression, statistics show that it's incredibly likely that you know someone who does. It's important to not only recognize the symptoms of depression in yourself but to be able to identify them in friends and loved ones who may need help.

Recently, Nash took 120 of the signatures from suicide notes he's received to a tattoo parlor, where he had the signatures turned into a piece of wearable art.

Nash's tattooed arm is now a visual aid to his presentations, showing the students he's speaking to that if all of those other kids can unburden themselves of their suicidal thoughts, those listening in the crowd can too.

It's also important to understand someone who suffers from depression can't be cured with a motivational talk or a kind gesture. It's an ongoing struggle, but the most generous thing you can do for yourself and to others is to be kind.

His tattoo is a powerful reminder that while depression can feel incredibly lonely, you're never alone.

While speaking with Nash, there's an overwhelming sense he's the type of person who wears his heart on his sleeve, and now he's got 120 tattooed signatures there to prove it.