Why you're way more familiar with William Shakespeare's work than you think. 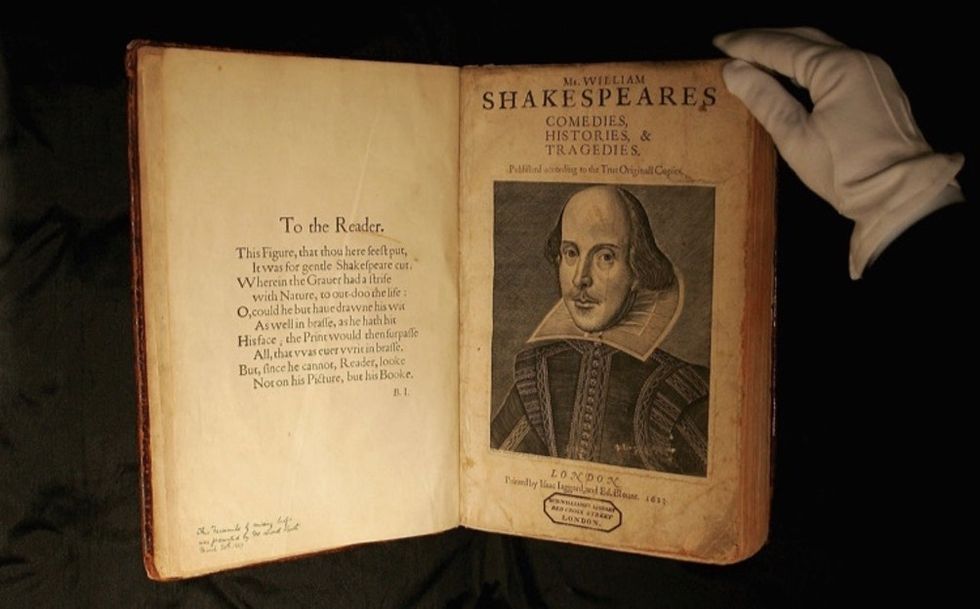 That William Shakespeare is the greatest writer in the history of the English language is basically a foregone conclusion.

His work is some of the most widely read in the world and has been translated into nearly every major language (including Klingon). Over his long career, he wrote dozens of plays and poems that were as varied as they were significant.

From gloomy, bloodstained tragedies about flawed, cold-blooded kings to countless quirky comedies about zany misunderstandings, laughable romances, and madcap heroes, the work of Shakespeare is monumental.

As an ode to Shakespeare's work and to commemorate the 400th anniversary of his death, Christie's will auction off four early editions of his collected work in a landmark sale.

The first of these four folios, which contains 36 of his plays, is expected to sell for a generous U.S. $5 million.

Not the most frugal purchase. But it holds some absolutely majestic allure, even for a jaded collector.

Shakespeare's first folio has been hidden from public view for over 200 years and contains some of the earliest editions of his plays, 18 of which had not been previously published. Owning the first folio is basically like owning an original Picasso with a Babe Ruth rookie card taped to it.

The folios toured New York in April and are currently viewable in England (Shakespeare's birthplace), where they will be auctioned off individually.

“It is deeply moving to handle the first printed record of his collected plays and to be reminded of their tremendous impact,” said Margaret Ford, international head of books and manuscripts for Christie’s.

The other three folios will probably have less obscene price tags, but all of them are extremely marketable. The third folio even has the iconic portrait of Shakespeare done by Martin Droeshout.

Even if you’ve never read any of his plays or sonnets, you’re still probably familiar with his work. After all, "West Side Story" is based on "Romeo and Juliet," "The Lion King" is based on "Hamlet," and late '90s/mid-'00s teen flicks "10 Things I Hate About You" and "She's the Man" are based on "Taming of the Shrew" and "Twelfth Night," respectively. See? You're a Shakespearian and didn't even know it.

For centuries, Shakespeare has also been credited with inventing or popularizing thousands of words. While there is controversy about whether he actually coined all those words or that dictionary-writers just thought his works most prominently captured the vocabulary of the time, there is no doubt he has helped pepper our culture with some delicious vocables.

Here's a hint: I've used 21 of them in this story alone. Check them out below, along with the first text in which they appeared: