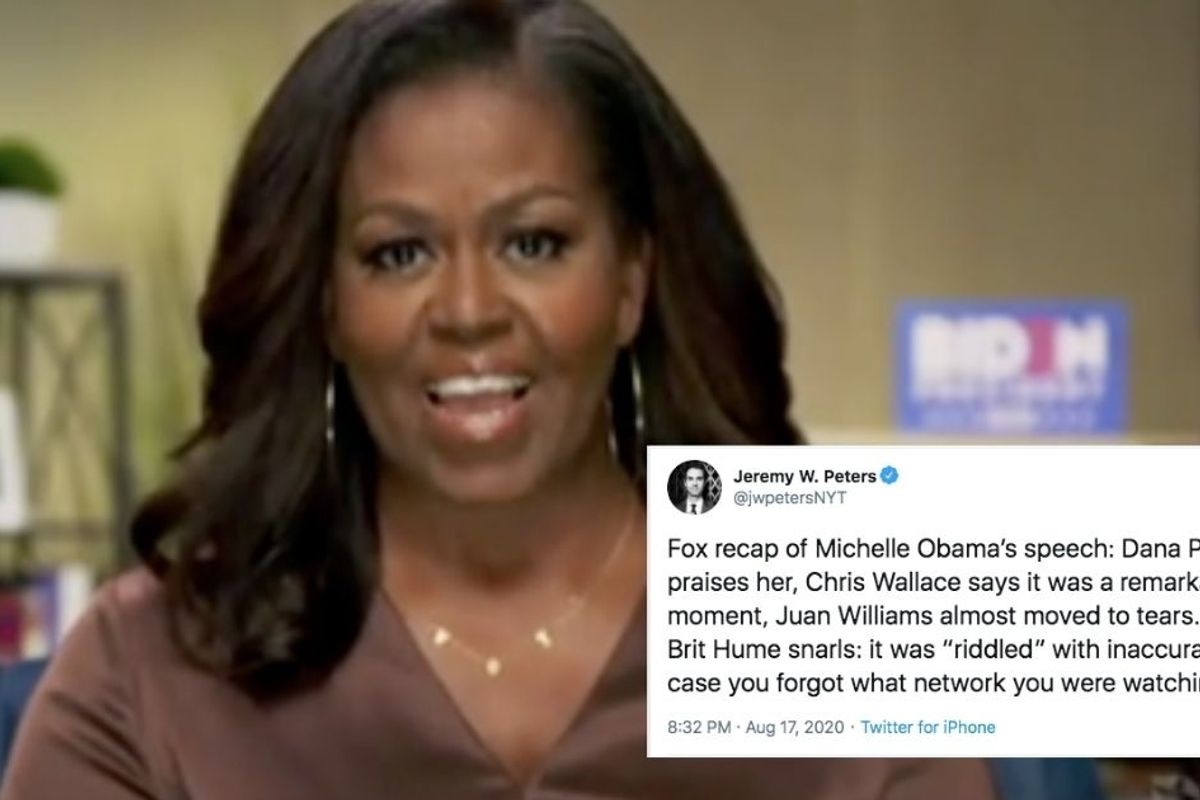 If you missed Michelle Obama's speech during the opening night of the Democratic National Committee convention, you truly missed out. In a prerecorded speech, the former first lady managed to hit just the right balance of empathy and honesty that's so badly missing from most of politics today. The fact that she's not a politician and doesn't even particularly care for politics, yet has a more intimate knowledge of the job of President of the United States than most, makes her a powerful voice at this juncture.

And she used that voice to speak directly to the American people, to call on our better angels and explain why this election matters. She pointed out that Joe Biden knows how to bring back an economy and beat back a pandemic—he helped do both during his eight years in the vice presidency. And in a somewhat uncharacteristic move, she explicitly named Donald Trump—not pointing to his many character flaws, his problematic policies, and the thousands of lies he has told, but making the simple case that he has proven he can't do the job we need him to do.

"Let me be as honest and clear as I possibly can," she said. "Donald Trump is the wrong president for our country. He has had more than enough time to prove that he can do the job, but he is clearly in over his head. He cannot meet this moment. He simply cannot be who we need him to be for us. It is what it is."

She also referred to her previously viral statement, "When they go low, we go high," pointing out that it doesn't mean to overlook the very real problems present in our politics.

"Going high does not mean putting on a smile and saying nice things when confronted by viciousness and cruelty," she said. "Going high means unlocking the shackles of lies and mistrust with the only thing that can truly set us free: the cold hard truth."

If we want to end the chaos and division—and keep alive the possibility of progress on the issues we hold dear—we’v… https://t.co/j4fnj9TbPk
— Michelle Obama (@Michelle Obama)1597718787.0

The speech drew widespread praise, even from unlikely sources. Fox New anchors Chris Wallace and Dana Perino both lauded Obama for the authentic, effective way she addressed the nation and made the case for Biden.

"You got the sense when you talk about authenticity, she has it in spades," said Perino (who served as President George W. Bush's press secretary). "She has that voice, she has clarity, and she knows what she is out there wanting to do. She was trying to get everybody to really focus and then she had a call to action: Ask for your ballot tonight."

"I think that the DNC, if they look over the course of the night—the first virtual convention of our history—I think they would say that Michelle Obama stuck the landing," she added.

Wallace was a bit more colorful in his commentary, calling her speech "effective" and "a heck of a contribution."

"She really flayed, sliced and diced Donald Trump, talking about the chaos and confusion and lack of empathy, especially coming from this president and this White House. Spoke more about the deficits of Donald Trump than the pluses of Joe Biden, but did talk about especially, not so much policies, but especially his empathy and what he has been through and his care for average Americans."

You know when Fox News heaps praise on a DNC speech, something historic just happened. Though, of course, the network did manage to have at least one of their big names throw in some criticism.

Obama opponents tried their best to deflect from the near-universal positive reactions to her speech by circulating a video from 2013 of Michelle Obama praising Harvey Weinstein, but such attempts fall flat when it takes ten seconds to find multiple photos and videos of Donald Trump with both Harvey Weinstein and Jeffrey Epstein. The sad truth is that most of us probably know and admire people who are slimy sexual assaulters behind closed doors. Praising or hanging out with someone before we find out their true nature can be forgiven. Offering well wishes to publicly known and charged child sex traffickers, as Trump recently did with Epstein partner Ghislaine Maxwell, is far more problematic.

But that's another story.

Last night, Michelle Obama proved once again that she has her finger on the pulse of America far more than practically anyone else associated with politics. She's the world's most admired woman for a reason, and her DNC speech drove that reason home.