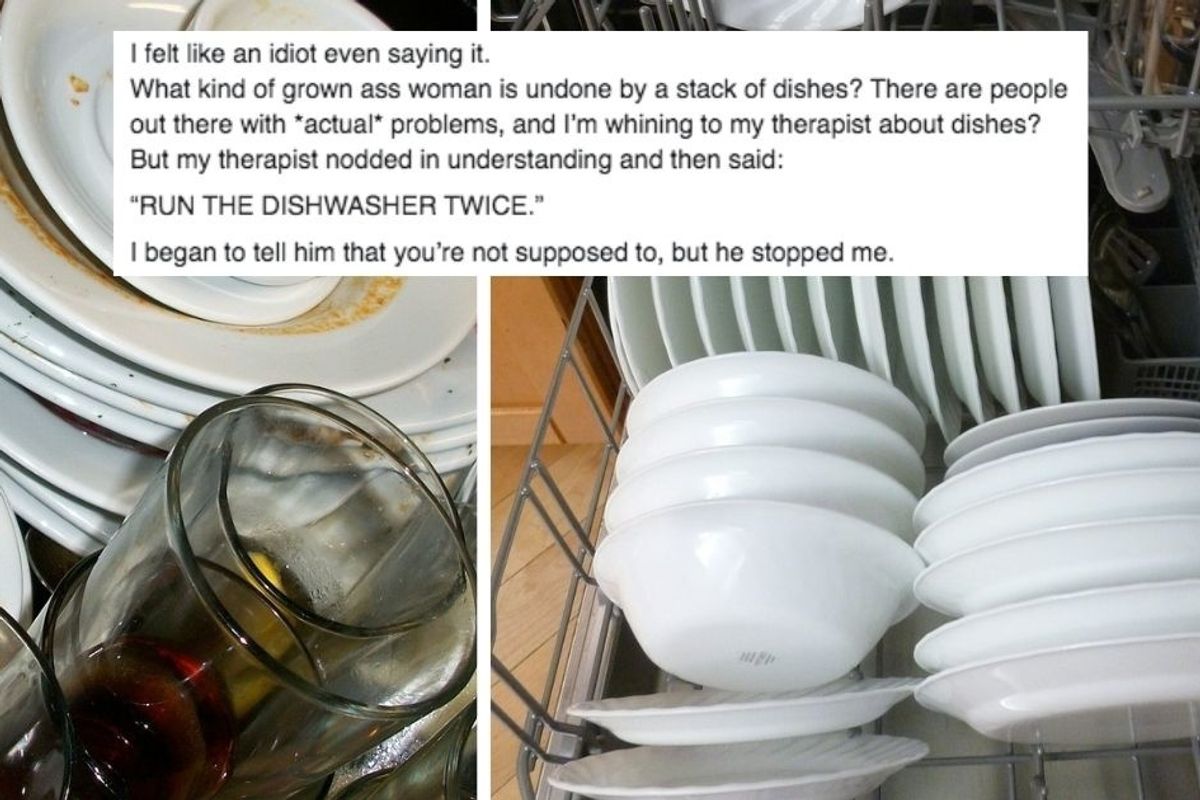 Danielle Wunker, a Licensed Professional Counselor and Supervisor, shared a story on her Facebook page that is resonating with people who struggle with mental health issues. It originally came from an answer from Katie Scott on Quora to the question "Has a therapist ever told you something completely unexpected?"

"When I was at one of my lowest (mental) points in life, I couldn't get out of bed some days. I had no energy or motivation and was barely getting by.

I had therapy once per week, and on this particular week I didn't have much to 'bring' to the session. He asked how my week was and I really had nothing to say.

'What are you struggling with?' he asked.

I gestured around me and said 'I dunno man. Life.'

Not satisfied with my answer, he said 'No, what exactly are you worried about right now? What feels overwhelming? When you go home after this session, what issue will be staring at you?'

I knew the answer, but it was so ridiculous that I didn't want to say it.
I wanted to have something more substantial.
Something more profound.

So I told him, 'Honestly? The dishes. It's stupid, I know, but the more I look at them the more I CAN'T do them because I'll have to scrub them before I put them in the dishwasher, because the dishwasher sucks, and I just can't stand and scrub the dishes.'

What kind of grown ass woman is undone by a stack of dishes? There are people out there with *actual* problems, and I'm whining to my therapist about dishes?

But he nodded in understanding and then said:

I began to tell him that you're not supposed to, but he stopped me.

'Why the hell aren't you supposed to? If you don't want to scrub the dishes and your dishwasher sucks, run it twice. Run it three times, who cares?! Rules do not exist.'

It blew my mind in a way that I don't think I can properly express.

That day, I went home and tossed my smelly dishes haphazardly into the dishwasher and ran it three times.

The next day, I took a shower lying down.

A few days later. I folded my laundry and put them wherever the fuck they fit.

There were no longer arbitrary rules I had to follow, and it gave me the freedom to make accomplishments again.

Now that I'm in a healthier place, I rinse off my dishes and put them in the dishwasher properly. I shower standing up. I sort my laundry.

But at a time when living was a struggle instead of a blessing, I learned an incredibly important lesson:

There are no rules.

Anyone who has been in a mental or emotional place where even just the most basic, mundane tasks seem overwhelming understands the wisdom in this lesson. Dishes might seem like such a minor detail of life, but those kinds of minor details can be the straw that breaks the camel's back mentally. If you've never stared at a basket of laundry that would take three minutes to fold and thought, "Nope, can't do it. Not now. Maybe not ever..." then you may not need this lesson, but there are millions of people who appreciate the express permission to let go of the rules in our heads about how things have to be done.

Adjusting expectations and arbitrary ideas about how something works is incredibly freeing and can provide a seemingly temporary fix for a seemingly insurmountable problem. Oddly enough, though, that temporary fix can be the necessary bridge that gets someone from unable-to-cope-with-daily-life-things to functioning on a somewhat normal level.

Mental health is such a tricky thing to manage, and many of the tools for managing it run counter to what we might expect. That's what therapists are for—to help us step outside the box of our own brains, adjust our thoughts and behaviors to create greater possibilities for ourselves, and give us permission to reject the negative voices in our head try to keep us locked in unhelpful or unhealthy patterns.

Even when that unhelpful pattern is as simple as letting the dishes pile up instead of running the dishwasher twice.