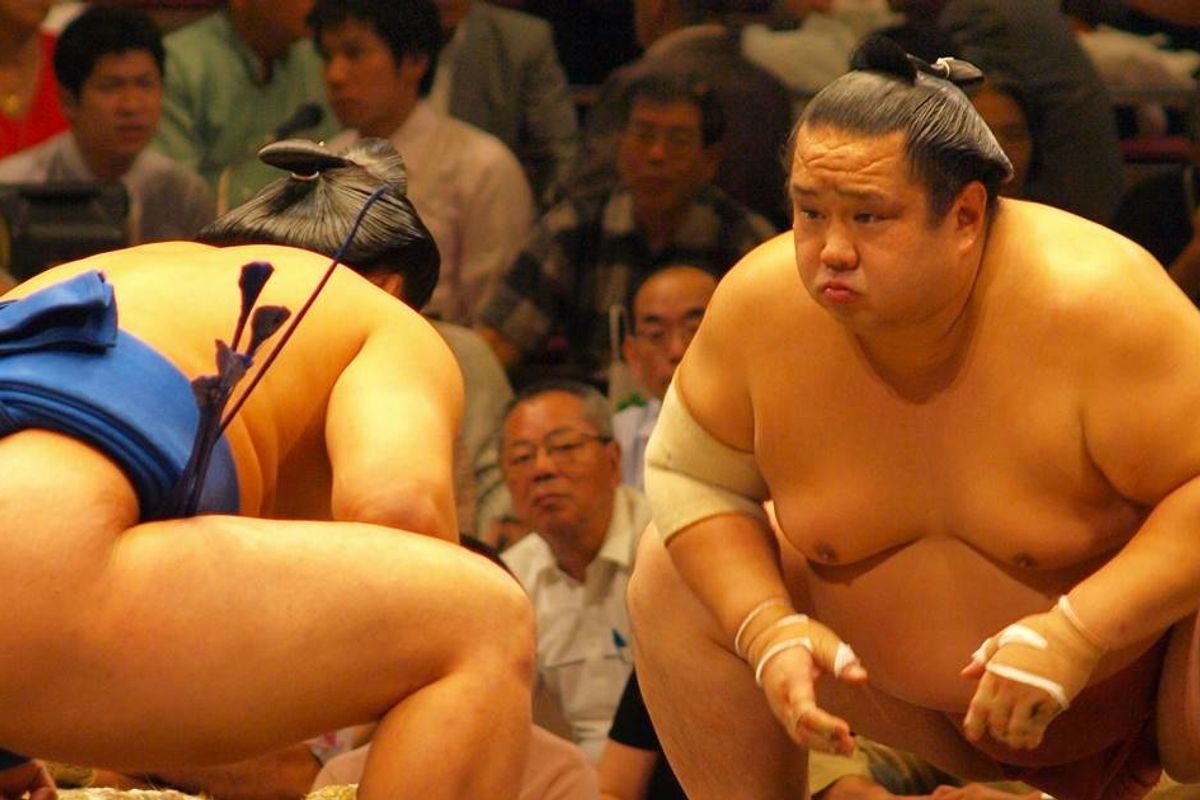 Wednesday morning, around 5 a.m., an elderly man saw a woman jump off a pedestrian bridge over the Kenagakawa River in Tokyo's Adachi Ward. The woman in her 30s plunged about nine feet into the water in an attempt to commit suicide.

"I can't die!" the woman yelled while struggling in the water. "Don't die!" the man called back while grabbing his phone to call the paramedics. As the man frantically tried to get help, a group of sumo wrestlers were alerted by the commotion.

The closest building to the bridge where the woman made her jump just happened to be the Sakaigawa Stable, a dormitory and training facility for sumo wrestlers. About twenty very large men rushed to save the drowning woman.

They jumped in the water, grabbed her and pulled her to safety.

It must have been quite the site to see these gigantic men spring into action. The woman probably couldn't believe her luck that she had twenty of Japan's finest athletes come to her rescue. After they safely brought her to the river bank, the trouble wasn't over yet. When the paramedics arrived, they put the woman on a stretcher, but they couldn't get the stretcher up to the street level because the river bed lies six-and-a-half feet below street level.

The group of sumo wrestlers got together and lifted the stretcher to the road so the woman could be put into an ambulance. The woman was taken to the hospital where doctors said she suffered no serious injuries.

The local police department is considering giving the wrestlers a certificate of commendation for their bravery as well as the man who first noticed the woman jumping. No word yet on whether they will receive a celebratory banquet. But if they do, they sure make sure the caterer brings enough food for 20 sumo wrestlers. The average sumo wrestler consumers 7,000 calories a day and weighs 300 to 400 pounds.

While the thought of twenty sumo wrestlers running and jumping in the water has an element of humor to it, the story also calls attention to Japan's suicide problem.

According to the journal Psychiatry and Clinical Neuroscience, Japan's suicide rate has been unusually high due to "cultural factors … such as a tradition of honorable suicide as well as permissive attitudes towards suicide that remain in modern times."

The country reached its peak in 2003 of 34,427 suicides after an economic downturn hit businesses hard. This caused the country to get serious about suicide preventing, enacting measures that brought government and private support groups together to address the problem.

Last year was the lowest number of suicides recorded in the country since it began keeping tack in 1978. In 2019, the country recorded 20,169 suicides.

If you're thinking about suicide, are worried about a friend or loved one, or would like emotional support, the National Suicide Prevention Lifeline is available 24/7 across the United States.